Today we will be looking at another vendor shuffle, very similar to Spirits of Harmony. Frozen Orbs drop from Wrath of the Lich King dungeon bosses. They can often be found quite cheap on the Auction House and they can be turned in for the various eternals. Most of the eternals are still in demand. The Frozen orbs are also a reagent in a lot of Warth of the Lich King epic recipes that can be desireable for transmog reasons. 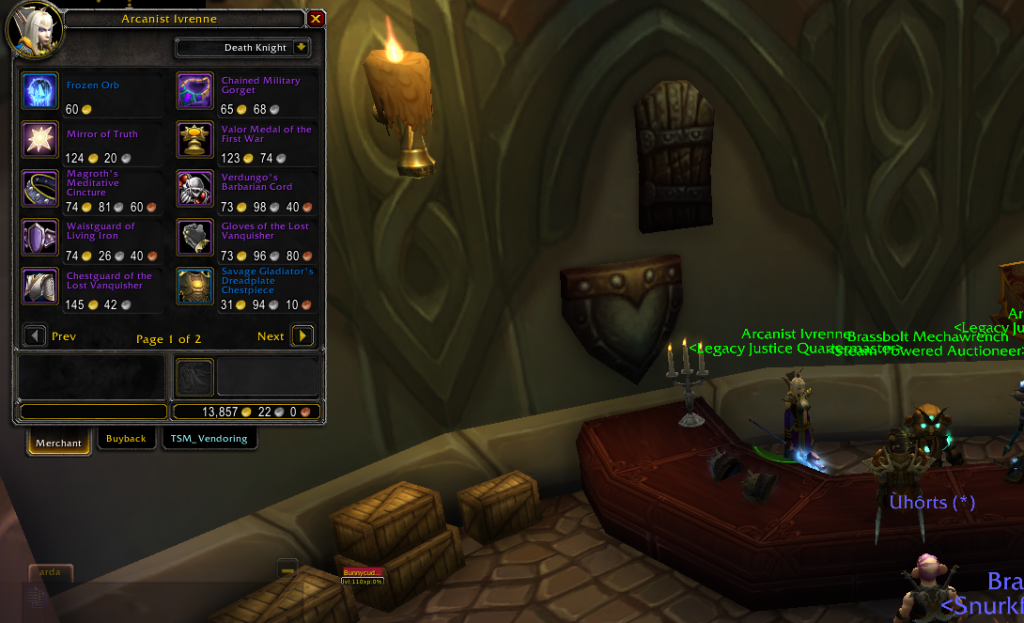 This is the real advantage. The orbs can be purchased at a vendor in old Dalaran for 75 gold (60 gold (!) if you are exalted with Silver Covenant/the Sunreavers). The current median price in EU for the Orbs at the Auction house is 84 gold. So that is a nice 30% profit just there. Now add the fact that the most in demand eternals sell for upwards of 100 gold and this start looking really good.

It is sold from your factions Legacy justice quartermaster. Either Arcanist Ivrenne or Magistrix Lambriesse.

Frozo is the Frozen Orb Trader. He can be found in the Northrend version of Dalaran in the crafting district. You can trade your Frozen orbs 1 to 1 for all the 6 types of elemental eternals. Eternal Earths and Shadows can be obtained from mining in Northrend and are generally to cheap for the vendor trade to be worth it.

What do we flip?

If we compare the region median prices for all the eternals sold by Frozo we can easily see that water and fire are the only two that are profitable at current levels. Your server will likely deviate from this however, so you need to check your prices. It is likely that more of them are profitable. The reason that Eternal Water and Fire are the two most lucrative ones is simple. Waters are used for the Tome of Illusions: Northrend in addition to a lot of Wrath recipes that can be transmogged. The tomes are fairly new to the game and drives demand up. Eternal Fire is used for Titansteel bars. These are used for a lot of transmog recipes that sell well as well as for the motorcycle mount from engineering. The other two eternals used to craft these bars, earth and shadow, can be obtained fairly easily from mining and has much higher supply.

You can also buy Frozen orbs and sell those on the Auction house using the same settings to people who do not know about the vendors.

Can you craft the finished goods?

If you have a miner that can smelt titansteel or an enchanter that can make tomes, this will likely be even more profitable. If you can then further use the bars for crafting mounts or transmog, that’s the cherry on top. The average daily sell rate for eternals is not too massive, and since you can buy as many as you want with gold you want to ensure you do not flood the market too much.

These will depend on the amount of rep you have. If you are exalted the settings are extremely simple. Buy frozen orbs below 60 gold from the auction house. Buy from the vendor and turn them into eternals to either sell or craft with. As you can buy inifinite amounts you should never buy above that from the Auction House.

My TSM settings can be used to sell both eternals and frozen orbs on the auction house. I have set it up with stack sizes of 1, 5 and 10 for auctioning. As always I encourage you to experiment with your settings. The same operations are applied to both eternals and frozen orbs. I use one custom price in my operations called frozenbuy. You should set it to the price you can buy frozen orbs for at the vendor, 60g if exalted, 75g if neutral. This is used as the maximum price for shopping scans for Frozen orbs and as a part of the minimum price calculation. I set the minimum profit to 20 %.

The settings can be found in my pastebin here.