This week was focused primarily on restocking. I did some world quests to top up my characters on order hall resources. I also hit one of the biggest mailboxes I have ever hit on the challenge realm to pass 3 million gold!

This week was another great one. My liquid gold increased by about 350k, mostly carried by some SICK weekend BoE sales. I sadly forgot to take a screenshot of the biggest mailbox, which was 612k!

We once again managed to hit 1 million gold in total sales this week!

I restocked a decent amount of flasks and gems as well as some enchants.

Once again I stocked up a decent amount of BoEs in the beginning of the week followed by some smallish mailboxes before I hit the jackpot today!

I had some absolutely crazy BoE sales, with the high point being selling a pair of Gloves of Abhorrent Strategies for 340k. These were most likely the 975 ones I bought about 2 months ago. Nice to see them finally move. 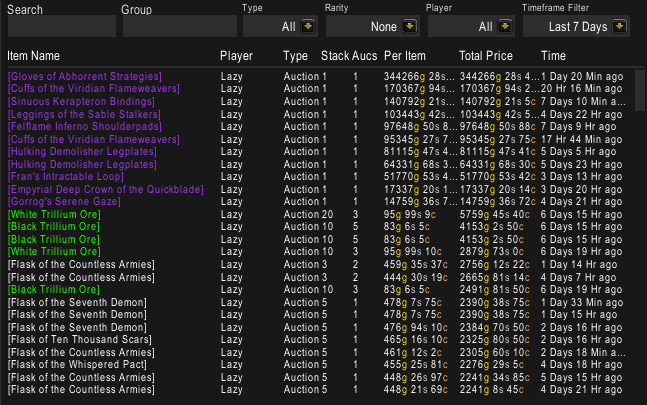 This week was massive in terms of 110 BoEs once again. I did not sell too many 101s, but the Fran’s at 52k is very respectable. I also sold an Empyrial crown for 17k! Must have gotten the perfect combination of stats. We can also see that I moved a nice amount of Trillium Ore and flasks as usual.

Buying BoEs is absolutely crucial to keeping the market rolling. I will likely be investing in 110 BoEs for at least another month or two. I generally only buy stuff at item level 945 and above at this point as I don’t find deals on lower item levels, and they just don’t seem worth it.

Trillium ore and flasks are my top sellers in terms of amounts. We can see that I am getting quite low on enchants. The profit margin has not been there lately so I have not been restocking them too diligently. 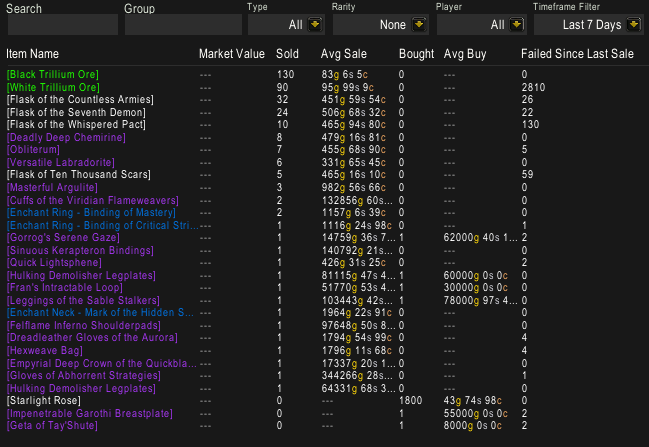 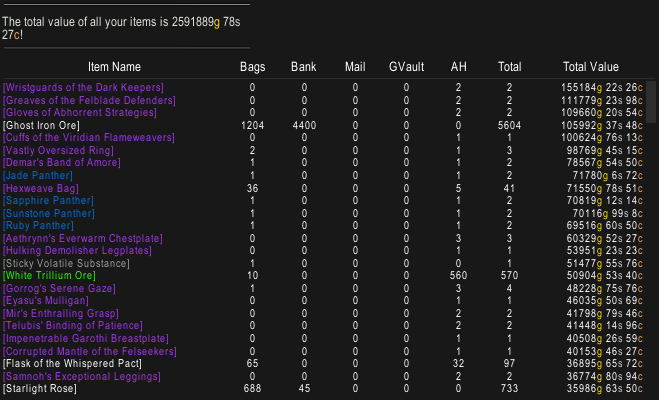 This week we see that my Starlight Rose shopping shows up. I also have a nice amount of panthers laying around. BoEs are still the majority of my inventory though. I am slightly down since last week as I have not yet restocked any BoEs. I expect I’ll buy some more this week to keep my stock rolling.