This week I did not do too much on the challenge. I mostly spent my gaming time restocking and reposting battle pets. I did spend some time leveling my priest, but it’s looking doubtful if I have time to get it to 110 before BfA. I may have to play something else as a main.

I did very little this week outside of reposting my Auctions. I’ve mostly played my priest, which I haven’t really counted as part of the challenge yet, but I am doing it now. This is why my played jumped up so much.

I will have to finish getting mining on my DK soon, so I can start crafting the bars needed for transmog.

On the plus side I did pass 5 million on my banker, and I am almost at 6 million total including my main account. I also had pretty decent sales overall, but my AH value is getting a bit low. Luckily we will soon be in the middle of a new expansion with oodles of new markets.

We can see gold is trending upwards, and that I once again did not really spend any gold this week. 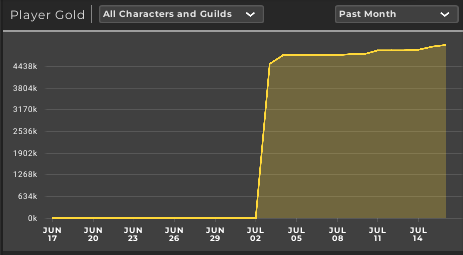 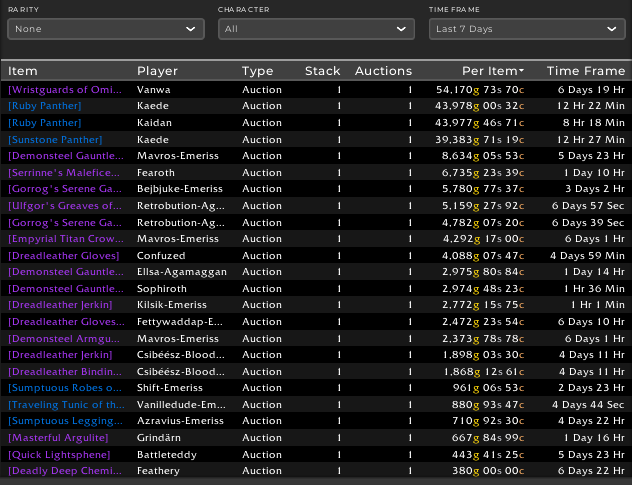 This week I sold 3 panthers! It’s been a while and it’s very nice to see them sell. I also sold a decent number of BoEs, at pretty low prices. The crafted 850 gear is also still selling really well, with both LW and blacksmithing armor selling decently.

Lastly I sold some assorted crafted transmog from WoD.

Total sales are slightly down since last week. My sales are pretty much completely equal to the lost AH value, which shows that gold is mostly going out due to the fact that I have not restocked much.

No inventory viewer in TSM4 yet. I expect that we managed to make a real dent in the BoE stockpile this time, and I think it would contain a lot more different items than it typically has lately. I haven’t really spent any gold, so no new items of note.