This week I made the switch to TSM 4 as you will see in the screenshots. Sadly there is no inventory viewer in TSM4 yet so we will have to survive without it. I crafted up my Felsteel Longblade and I worked on the Vial of the sands recipe farm, sadly no recipes. I also spent some time farming primal air to craft my first felsteel longblades as my realm was almost completely dry.

The other major thing I did was to decrease my BoE prices even more drastically. This had a massive effect and ended up with me selling off a large portion of my stock, so my AH value is now way down.

I also spent some time leveling my Death Knight and working on getting mining up. It’s at 260 mining skill at the moment, so I will soon be able to melt fel iron and felsteel.

As I spent most of the week away from the computer there wasn’t much of interest that shows up on the graph. The only thing that did show up really was the one clean out I had on BoEs. 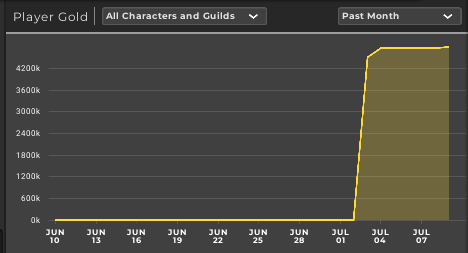 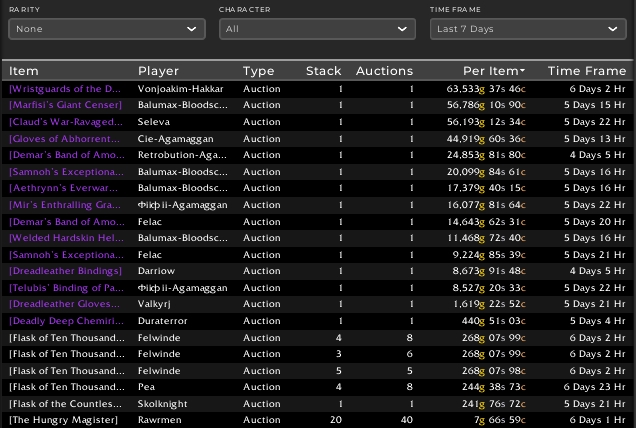 This week was pretty much completely dominated by my firesale prices on BoEs taking over. We can easily see that I sold a ton of BoEs, both 101 and 110. My pricing strings are now extremely aggressive as I want to get completely out of these markets before BfA comes and tanks them.

Total sales were similar to last week, but I moved a ton of items at prices quite a bit below market value. I expect I incurred quite a bit of losses on these items, but overall the market has been great, so I don’t mind.

I am still getting some very nice prices on crafted gear as well as you can see with some leather bracers selling for 8k, which is really nice. My flask sales were quite slow however, but that is to be expected. I only really had time for one repost this week as I was away for so long.

No inventory viewer in TSM4 yet. I expect that we managed to make a real dent in the BoE stockpile this time, and I think it would contain a lot more different items than it typically has lately. I haven’t really spent any gold, so no new items of note.