Apparently I managed to put in a good bit of work this week. Most of my gameplay was on my priest however, which I am only leveling so in terms of gold making I did not do too much. I did restock some panthers however, and sales have been massive.

This week I have mostly been leveling my priest. In addition to this I spent some time restocking markets, primarily keeping up with cooldowns for crafted Transmog gear from WoD and MoP.

I also restocked some panthers, as they have been selling like hot cakes recently. This is definitely a market to watch!

I’ve been working on getting Sunreavers Rep on my warrior as well, as I decided to try out the Frozen Orb into Eternal Fire shuffle. So far it has worked out decently with a couple of sales. I will decrease my price as my rep discounts get larger, hopefully reaching exalted quite soon.

I decided to show the full new summary from the dashboard this week. This includes all my characters on the realm. We can see that I was briefly above 6 million total before tumbling down when I started restocking stuff. Overall I managed to get 417k in sales for an average profit per day of 45k! 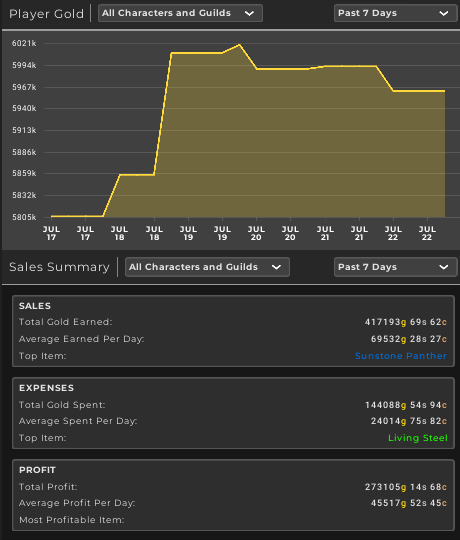 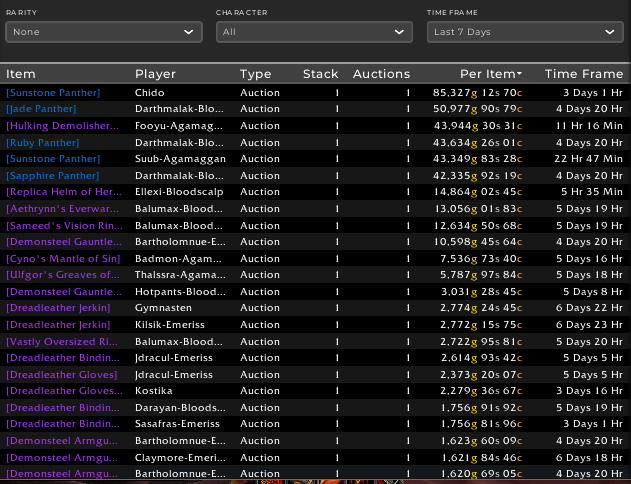 My Panther sales are up from 3 last week to 5 this week! Including selling one of my Sunstone Panthers for 85k! My crafting cost is about 35k so that’s a massive 50k profit right there.

My Replica Helm of Heroism finally sold as well. I have been keeping this one since the very beginning of my zero to one million challenge. Nice to see it finally paid off. I also continue to move BoEs. 101s and 110s are both still selling, even if my stock is getting really low.

The crafted gear from Legion is also still selling at a pretty good clip as you can see from the screenshot.