I’ve been working hard on my BfA spreadsheet this week, but I still found some time for the challenge. Mainly crafting up a bunch of Felsteel Longblades as well as finishing up the pre-patch questline on my warrior to be ready for launch.

We can see I did a good amount of work on my Banker this week. Mostly as I spent a lot of time working on my spreadsheet so I was always logged in on my banker as well.

My liquid gold went down by about 135k this week. Mostly because I entered the Medallion of the Legion market which requires a lot of gold. This also means my AH value increased by 570k, so overall I am doing quite well. Sales were a bit down, only totalling 136k this week, but next week will see us enter Battle for Azeroth with a ton of new opportunities.

We can easily see that the Medallions have had a large impact so far, mostly by costing me a lot of gold. 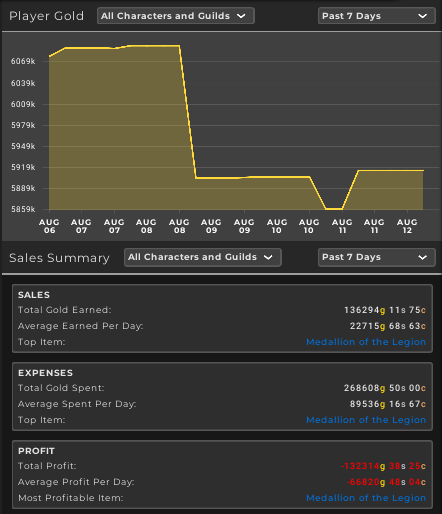 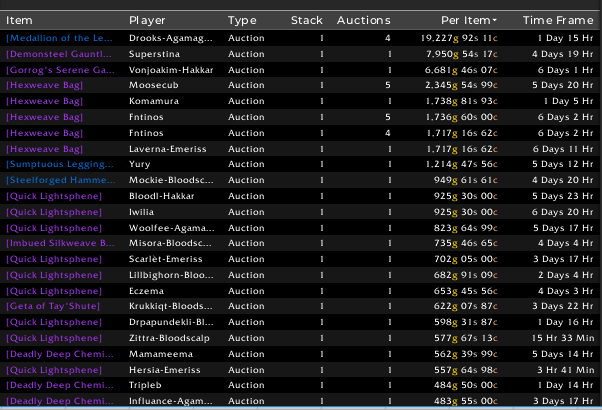 This week I did not sell any panthers or Felsteel Longblades. My top value item sold was 4 Medallions of the Legion. My average buy price is 15k, so that is a decent 4.3k profit per medallion. If you’re unfamiliar with this market I’ll be writing up a guide pretty soon. It’s a simple flipping market that relies on players wanting to use the Medallions to quickly finish the achievement for Warlords of Draenor Flying.

I’ve also been selling a LOT of gems. I expect players are optimizing the gear they will start BfA with to cut down on the leveling time as much as possible. Next time we will be half a week into BfA with most likely a lot of new ideas about gold making. I’ll be focusing on enchanting and jewelcrafting early, most likely selling materials from prospecting or disenchanting until I get the relevant recipes.