BfA is finally upon us! New markets, new materials and new zones. I spent my first week in BfA knee deep in crafting. I only hit level 113 on my warrior. Darkmoon decks have been the main name of the game so far.

This week I spent a ton of gold! BfA opened up and I dived straight into gold making mode. I’ve been doing a lot of crafting as well as diving into some BoE flipping markets. Overall I am down almost 1 million since last week. This is primarily due to the fact that I have taken a chance on several item level 350 and 355 BoEs. I’ve spent a total of 1.4 million gold on BfA BoEs. Outside of that I am pretty clearly in the green this week.

As we can see my total sales have been massive, averaging 47k per day. The main sellers are the  Darkmnoon Decks and the Blacksmithing crafted item level 300 gear. The vast majority of my time has been spent crafting Darkmoon Decks. I eventually reached a critical mass of cards so I can focus on leveling.

I’ve also been dipping into prospecting with some great success. Platinum ore is currently by far the best ore to prospect, as it is incredibly cheap.

My total AH value has absolutely exploded from about 2 million last week to a total value of my auctions currently at 7.8 million gold! 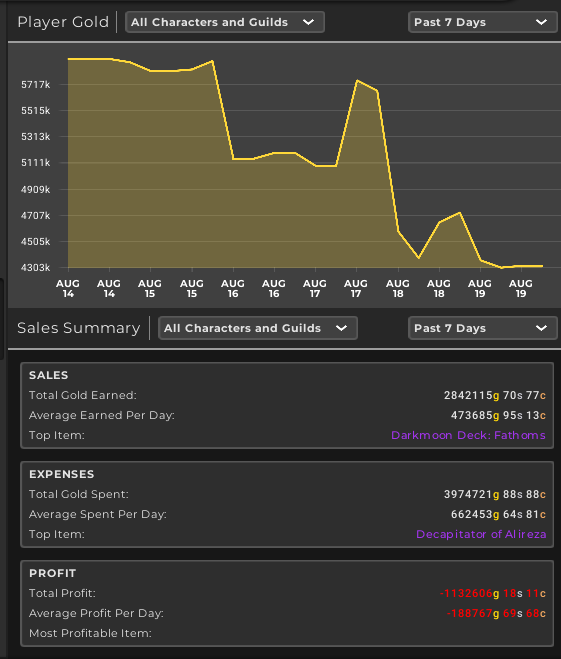 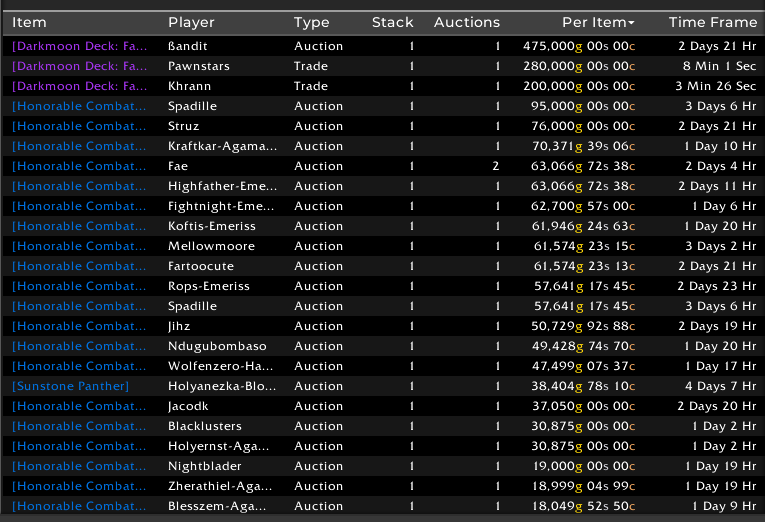 We can see my sales are dominated by Darkmoon Decks and Blacksmithing gear.

I’ve sold Darkmoon Decks for almost 1 million gold. I’ve bought materials for a total of 1.1 million and I still have several decks left over, so it looks very much like the market is worth it.

Blacksmithing has had a very impressive volume as you can see. The Honorable Combatant gear does not require Expulsom and sells really well. The price has gone down quickly though from the first days, but there are still profits to be made.

I’ve also sold a decent number of gems, both rare and Kraken’s Eyes, as well as assorted contracts, tomes of the quiet mind and the mount enhancements from blacksmithing.

As you can tell I’ve been trying a ton of different markets to see what sticks.