This week my sales regressed quite a bit. I spent a bit less time playing the game overall, as I had several other things going on in my life. BoE sales were overall much slower this week, which kept my sales total lower. I’m still making progress now, and I’m closing in on 8 million total gold.

This week had a much lower sales volume than the preceding five weeks. I only hit 1.1 million in sales. My liquid gold increased by 270k which is pretty good and I increased my AH value by 900 000 gold, so I am definitely progressing. I haven’t dived deep into figuring out what kept me back this week, but a lower volume of BoEs and low volume as well as lower prices on darkmoon decks are the main culprits most likely.

I’ve also been slacking off a bit on the gold making front recently, not to mention my misadventure with the new CPU i ordered, which meant my computer was out of commission for an entire day. Couple that with a very busy weekend outside of WoW and I don’t have as many sales as I would have liked.

As we can see I still had a decent bit of profit, but it was mostly in the beginning of the week, and then it was much smaller amounts of sales since Wednesday. Hopefully I can kick things back into gear next week and get some better sales numbers. 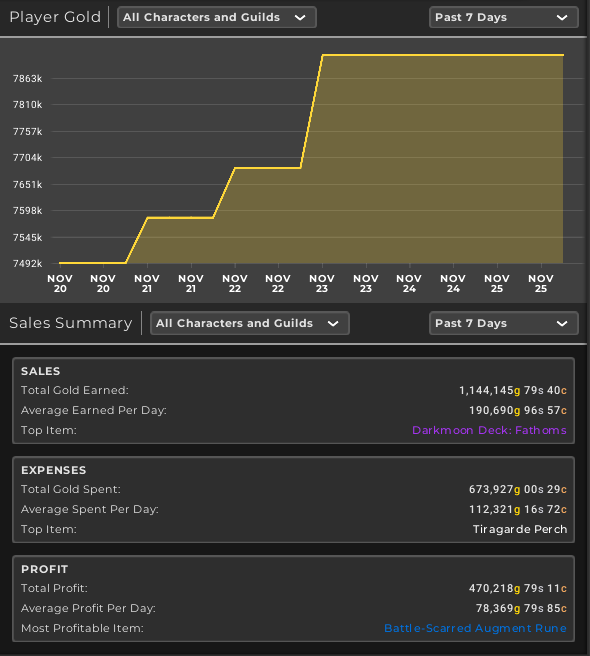 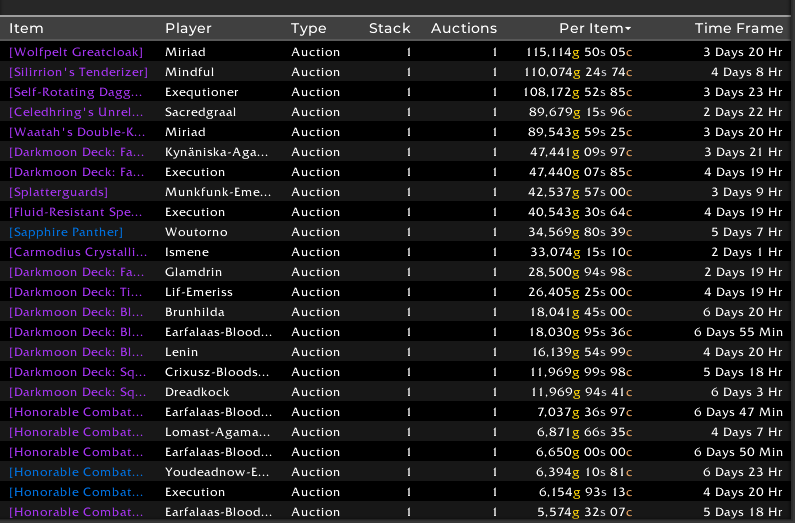 Overall my high ticket price items were much smaller this week. I only sold 8 BoEs this week, which is less than half of the 20 I sold last week.

Darkmoon decks still sell decently, but I have been way too slack in terms of crafting them to really generate significant sales sadly.

Material flipping has also gone very poorly this week, as you can see from the resale summary below. The flipping volume is much slower than it has used to be. It may be that we are now getting too deep into the pre-patch lull as players don’t really have anything end-game related to focus on. I may stop buying BoEs soon to get ready for 8.1 and the influx of players getting back.

I will definitely keep up my material purchases as I think 8.1 will bring back a lot of demand, particularly for items used to craft the new sinister combatant gear that will most likely be very much in demand for newly leveled characters. 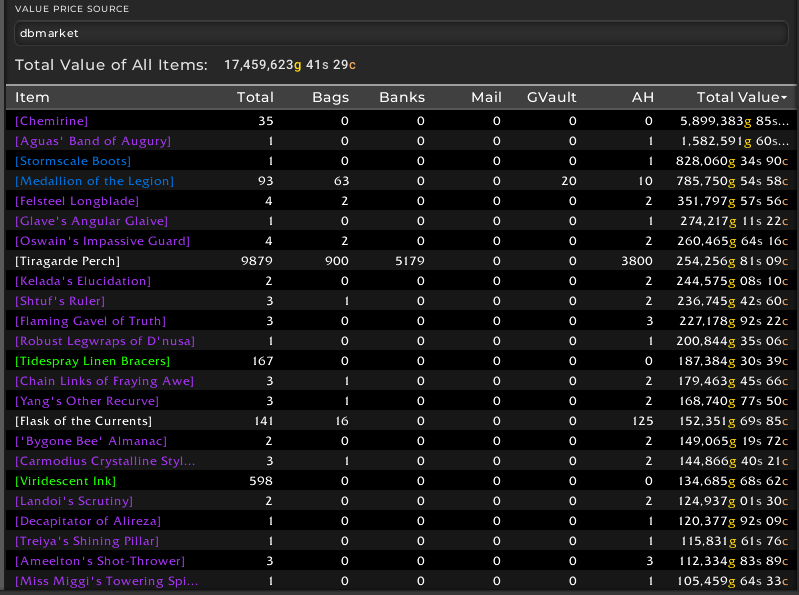 You’ll quickly notice the massive purchase of Tiragarde Perches I did this week. It will take a long while to sell, and may have been a bad idea, but the price was great and I decided to just go for it. Outside of that it’s still BoEs that is the majority of my inventory, with a decent amount of inventory in the crafting materials for Darkmoon Decks. I am running low on panthers yet again, and I really need to do a serious restock of those soon.

Follow me on twitter and twitch to keep up to date with my challenge. I’m streaming on Mondays at 20 CET and Wednesdays at 21 CET!