As most of you know I am not a farmer, but farming can be necessary to build up your gold to the point where crafting and flipping starts making sense. This post won’t be a guide to farming, but it will in stead look at it from the other side, which items are best to farm if you want to get gold quickly. Generally farming guides will just assume that all of your items sell and give a tentative gold per hour based on that, but the difference between BfA herbs and Uldaman transmog is massive.

I’ve been harping on this point before. How quickly you can sell your items is incredibly important. Getting gold quickly can be completely necessary if your sub is about to run out, or you just want a quick token. It will also make sense in the long run as the faster your items sell the faster you will get your gold back as quickly as possibly.

What items will sell quickly?

So let’s look at what kinds of items will sell quickly. Generally the items that sell fastest in WoW are always the materials in the current newest expansion. So right now that means the various materials in BfA. Generally speaking items that are useful at max level in terms of increasing character power will always sell faster than items that just have cosmetic effects.

Below is a rough list of potential markets ranked by how quickly the items sell. Now “Quickly” here is not a scientific measure. On any given day on a server there will move much larger amounts of herbs than potions, but the list is essentially a ranking of the desireability.

In terms of selling items quickly you want to sell to either people engaged in end-game content or crafters. These are by far the people that buy the most from the AH.

Most of the items that are useful in end-game content that sell at fast rates are crafted items. Enchants, flasks etc. are all crafted. The one exception is BoEs. Farming world drop BoEs can be very lucrative, but you will have to take a lower price if you want the items to sell quickly, as any one BoE will not sell instantly.

This is where the meat of potential farming really is. Obviously I will give recommendations for BfA, based on sale rates. This is not based on farming routes though, as I do not know them, but based on which items are easiest to actually sell.

In BfA there are 3 herbs you should target: Anchor Weed, Siren’s Pollen and Riverbud. Anchor weed is obvious as it is used in flasks. You can’t really target it though, so the other two will be the aim. Riverbud and Siren’s Pollen are used in the most widely used BiS potions which means that they are required in much larger amounts than the other basic herbs. As such they will sell at roughly the same rate, but a higher price than the other herbs. The only old world herbs that are potentially worth farming are the ones used for Vial of the Sands crafting. I would not recommend farming them though. Stick to BfA with herbalism. 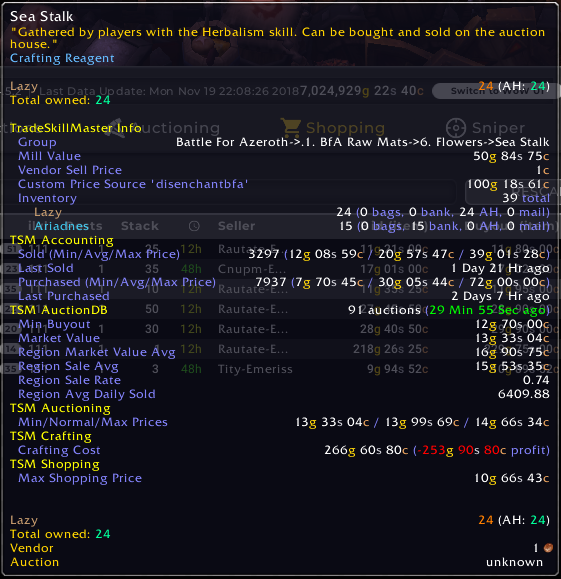 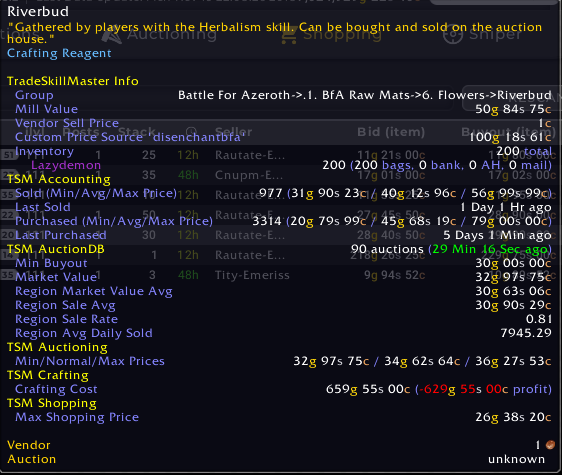 When it comes to BfA ores, you can’t choose what to farm as they all share the same spawn points. As such you should just farm BfA ores using the most efficient routes. There are also several old world ores that can be very worthwile to farm. The main ones are Ghost Iron Ore to supply the living steel crafters, Pyrium for Vial of the Sands crafters and The various TBC ores.

For leather in BfA the biggest part of your value will come from the Blood-Stained Bones. Based on the region sale rate data below you are better of farming coarse leather than Shimmerscale as the amount sold per day is almost 5 times greater for Coarse Leather. The uncommon quality leathers are currently essentially worthless and should not be targeted. New recipes in 8.1 might make them worthwhile, but they aren’t used by anyone in meaningful quantities right now. Old world leather is essentially not worth farming for the most part and you should stay away from it. 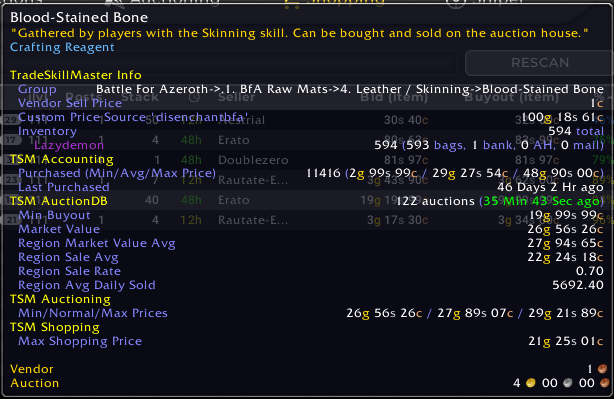 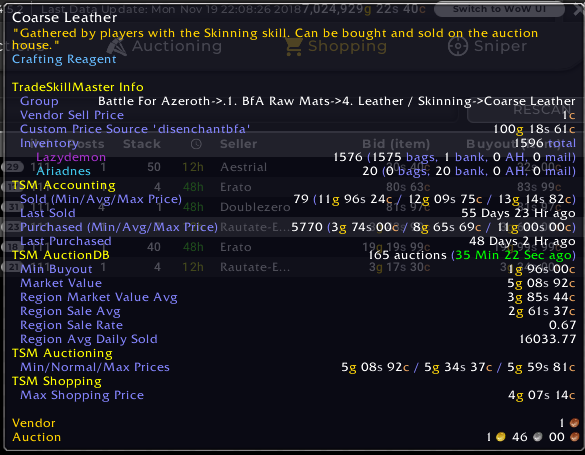 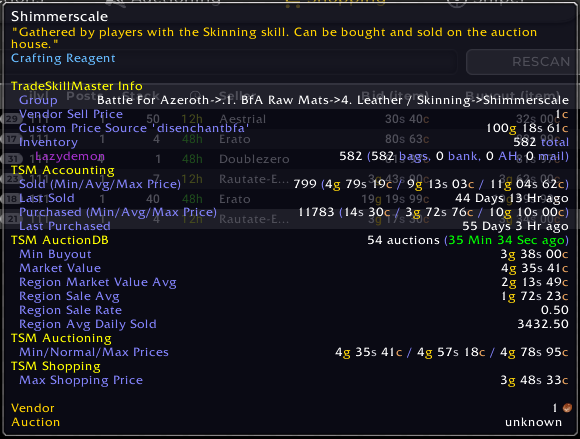 Cloth is great as it is required in absolutely massive quantities for Expulsom crafting. Both cloth types have massive sales numbers and decent prices. The other advantage here is that you can only farm cloth by killing mobs. Most of the hyper spawn spots people farm will also generate a substantial number of BoEs due to the massive number of mobs killed, allowing you to double dip into another market while farming. Old world cloth is essentially not worth farming for the most part and you should stay away from it. 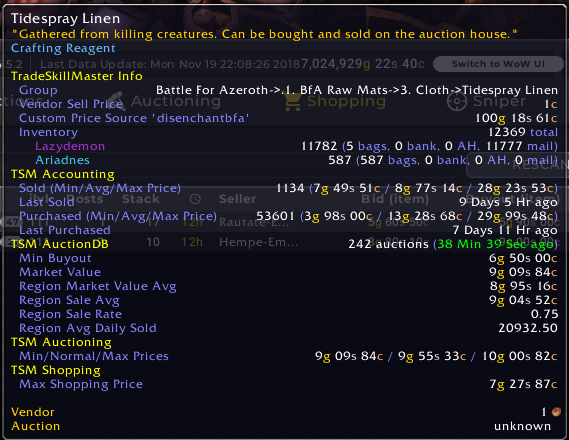 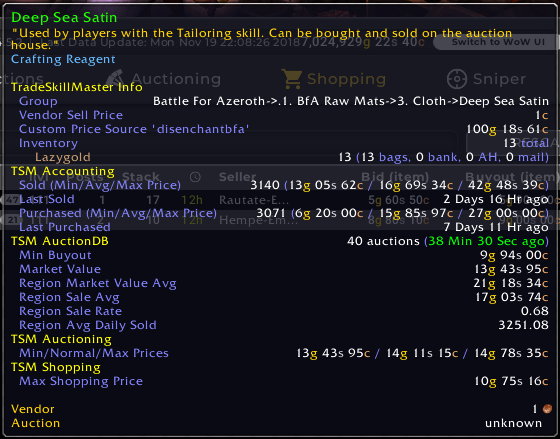 Stick to farming stuff that people need in large quantities if possible. You will get your gold back quickly and see results much faster. BfA materials will be your best bet, but some old markets and BoEs can potentially have higher value, but slightly slower sales.

4 thoughts on “The best items to farm for quick cash”