This week was another slightly more quiet week. I have spent a bit less gold as I have toned down my BoE aggressiveness slightly while we wait for 8.1. I am spending gold on some preparation for 8.1, and I have spent some time on BGs to get marks of honor.

This week was yet again a bit on the slower side in sales. That means I cleared 1.2 million in sales though, so it’s still pretty good. I also increased the liquid gold on my banker by about 530k, but I spent 200k on Orbs of Mystery on my other account so overall my liquid only increased by 300k. That still puts me above 8 million gold in total though, so i am now 80% done!

I had a nice spending spree at the beginning of the week and then a couple of nice mailboxes as we headed towards the weekend. Christmas is definitely getting close and my schedule outside of Azeroth keeps getting more filled, which keeps me away from the game. My crafting has definitely been suffering the most, but I have mostly kept up with flipping, except for materials which I have heavily neglected this week.

Overall my profits were really nice and it includes a massive restocking of panthers which have not yet turned into gold. 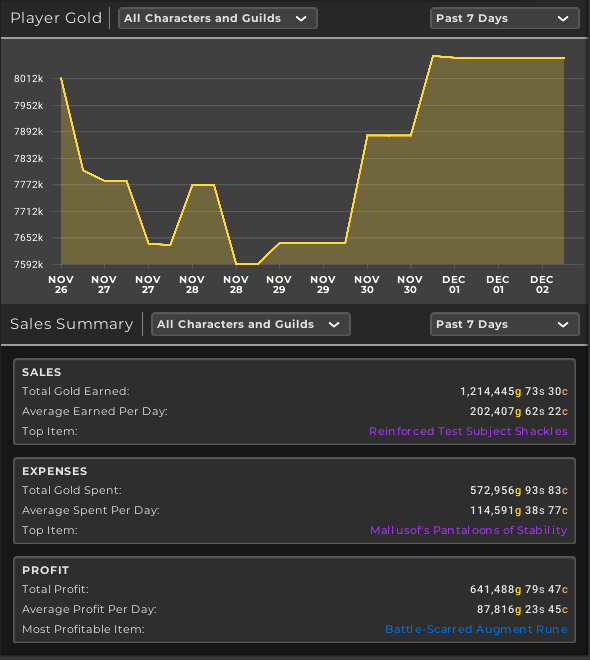 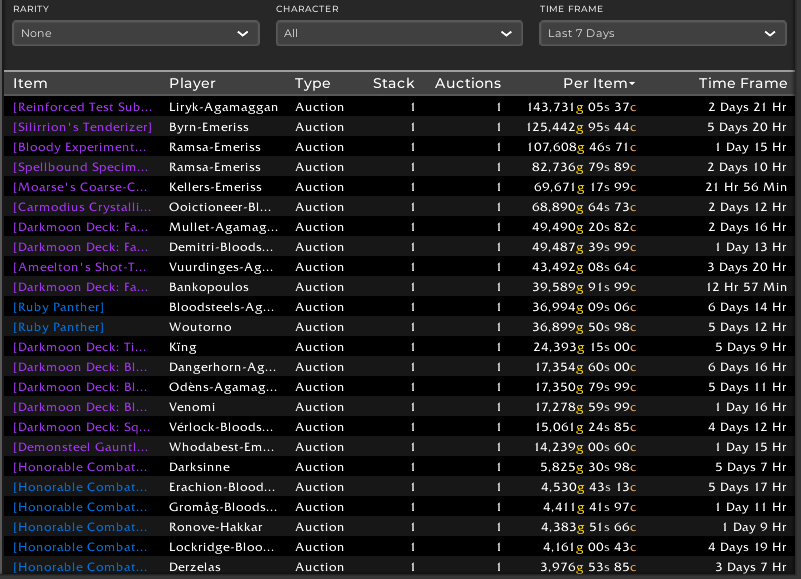 BoE sales are very noticeably down recently, and I only sold 7 BoEs this week, which is even fewer than last week. My darkmoon decks are selling just about as quickly as I can craft them however, which is great. I just need to find enough time to turn tidespray into expulsom, which is the major bottleneck here. I also sold two ruby Panthers, and I may have to recraft those right away.

The other highlight is a pair of demonsteel gauntlets from Legion that sold for 14k gold! That’s pretty nice for a crafted item from the last expansion. Honorable combatant gear is still selling decently as well, but I will not be stocking any more of those. I will save my materials for the new sinister combatant gear. Hopefully I can get in some more PvP to get more marks of honor. I’ll probably just farm PvP when I stream this week to get as many as I can.

Material flipping has been slow, but that’s mostly because I have not really been scanning for materials this week. As you can see my purchase amounts are quite low for most of the materials I have sold. The only thing I have been buying in any meaningful quantity is Platinum Ore. This is partly just for prospecting and partly some preparation for 8.1. 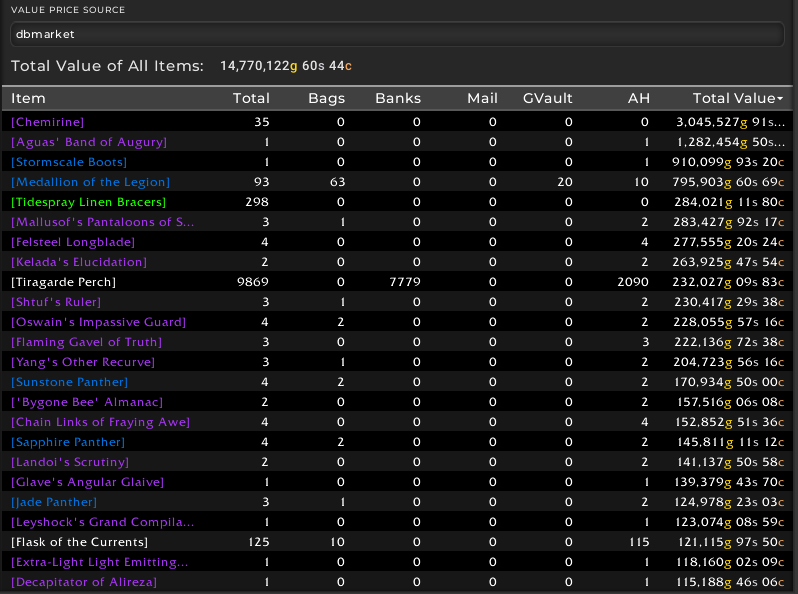 The major thing that stands out since last week is of course that panthers are back on the list in a big way. I had a nice restocking session for panthers this week, but I have already ran out of ruby ones, so I guess I need to hit the crafter again as soon as possible. BoEs, Tidespray and Tiragarde Perches round out the rest of my inventory. At this point I think it’s safe to say that my Tiragarde Perch purchase was not ideal, as I think it’s unlikely I will ever sell them at a meaningful profit, but you have to go for it every once in a while.

Follow me on twitter and twitch to keep up to date with my challenge. I’m streaming on Mondays at 20 CET and Wednesdays at 21 CET!