Inflation has always been a large factor in WoW. Every day more gold is created by players killing mobs and vendoring greens. This means that the total gold supply per player is always increasing. Long term this means that limited quantity items, such as TCG mounts will always increase in price. The same is true for tokens.

Is inflation bad or good?

Inflation will always be a large factor in WoW. The reason is simple. Blizzard wants new players to be able to afford buying stuff. This means that the newest expansion should generate more gold than the last one, so that players that already have gold from the last expansion aren’t given too much of an advantage.

I think inflation is mostly good for the game. Players who begin the game now can get gold to pay for consumables and items quite easily.

Inflation in past expansions

Inflation was extremely high during Warlords of Draenor. Optimized Garrisons could bring in a crazy amount of gold. In addition to this players did not need to trade too much with each other due to things like the Garrison mine and herb garden. More gold was created and less gold removed from the game than at any other point.

The main impact of inflation

Inflation in WoW has some interesting side effects. When more gold is generated this will over time end up in the hands of some small amount of players that get richer and richer. The average player will spend gold about as fast as they generate it, regardless of the rate. They will just end up buying more luxury items.

Why do I believe inflation is so high?

The 101 BoE market is the obvious choice here. The major players in this market have made ridiculous amounts of gold. There are two ways to get really rich in this market. Either buying cheap BoEs and reselling them or you can farm them by multiboxing. As each unique character can loot the same mob this is incredibly lucrative.

Below is a screenshot from Skittlezz420, she is a multiboxer that streams on twitch. 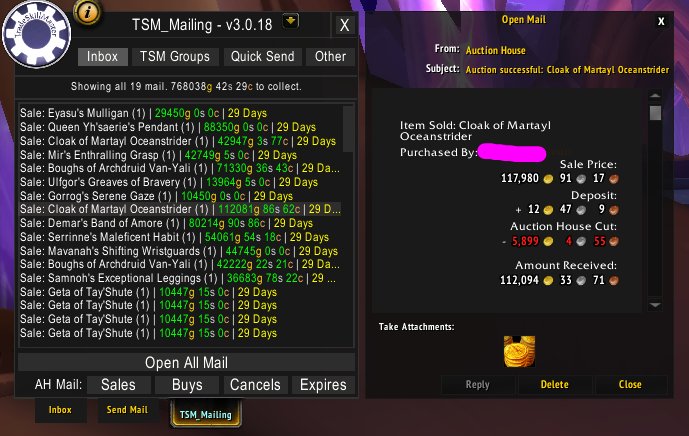 She can generally pull in 600 000 to 1 million gold plus per day when she posts her BoEs. This is absolutely crazy amounts of gold. All of this gold needs be created somewhere.

In addition toe the multi boxers there are a lot of flippers out there generating a lot of gold by flipping the BoEs. This will often be the people buying from multiboxers to resell at even higher prices to people looking to gear 101 twinks. Aada is one of the biggest flippers on the EU side and has been generating sales of 30 million plus over a ten day period, by flipping on several EU realms.

This gold needs to come from somewhere

If the general playerbase isn’t generating gold at unprecedented levels then there is no way this would be sustainable.

I think there are two main gameplay features in Legion that are generating a lot of gold. The two are Order hall gold missions and World quests.

Order halls generate a lot of gold and they have been steadily increasing the gold rewards from missions. We can easily compare order hall gains to the gains from Garrison gold missions in Warlords of Draenor. During WOD this guy earned 2.3 million gold across 10 characters over a 16 month period. That averages out to a monthly profit per character of about 14375 gold.

Now let’s take a look at the current state of gold missions in patch 7.3. /u/kanemoch on reddit has a detailed post on maximizing your order hall and his results. This week his average profit is 6.2k gold per day. That’s an order of magnitude higher than the garrison.

In former expansions rep has usually been gated behind daily quests. In Legion this has been completely replaced by the world quest system. The potential gold gains from WQs using gold bonus items on your combat ally and finishing the emissary caches is much higher than the rewards for end game quests.

You can get up to 700 gold for a wq in addition to 5075 gold extra per WQ using follower items. Add to this the 700+ gold from emissary caches (or Order hall resources that are even more profitable) and the picture gets quite crazy.

Order halls are massively driving inflation this expansion and it is much higher than during Warlords of Draenor. As such it has never been easier to get a million gold. It will be extremely interesting to see what happens in Battle for Azeroth. With no plans for a new mission system we could see a massive increase in gold generated from open world content or some other new driver of inflation.

If you like my blog, you should consider follow me on twitch and twitter because it will give you a live glimpse into my gold making adventures.

8 thoughts on “Inflation in Legion: The case for an all time high”