Blacksmithing was an incredibly hot market the first week of BfA. I was selling items for 30k-100k. While those numbers are no longer possible the market has now largely been forgotten and it represents a great source of profit.

Some of you will probably scoff at this market.

I don’t have an answer to that question, except that it’s a surprisingly large number of players as my sales below will attest to. 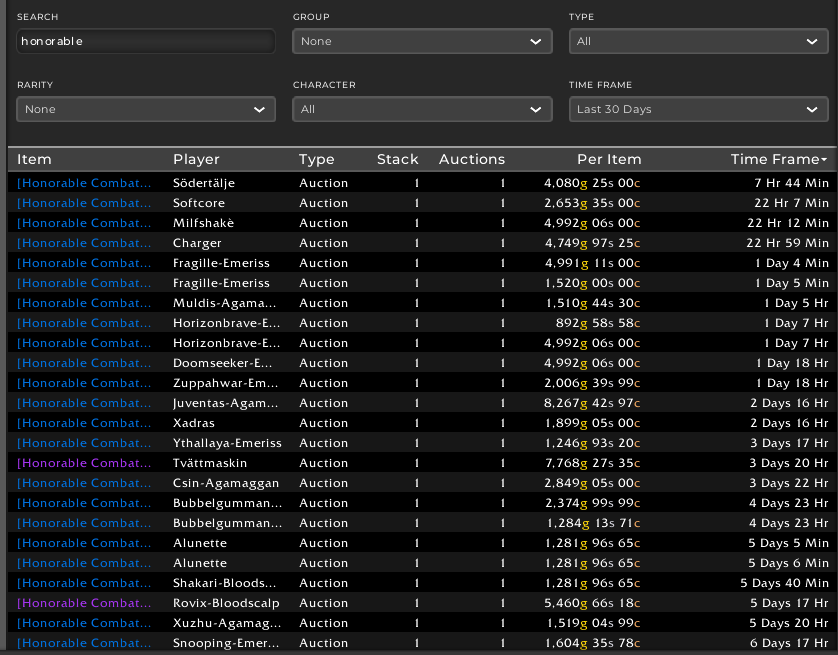 My crafting cost is around 1000 gold for most pieces. As you can see they are selling from between 1.3k up to 8k, with a surprisingly large number selling in the 2k-5k range.

Sales are also very steady, and I’m not even stocking a particularly large number items. I keep about 5 of each item in stock at any time. More crafts will definitely mean more profit though as you generate way more epic items if you craft more.

In terms of materials this market is as straightforward as they get. You only need two materials for all of these recipes, and one of them is from a vendor.

Storm Silver ore is going to be the major part of your crafting cost and you should try to look for it on the auction house every day. Buy it when it’s cheap to increase your profit margins.

You also need Elemental Flux which is sold by your blacksmithing trainer for 2g70s per.

For this guide I will focus on the Honorable Combatant gear. The reason is simple. They do not require expulsom. This makes them much more time-efficient to craft than the stormsteel weapons.

The rank 1 recipes are all learned from your trainer, so you can get started in this market with just a level 110 character. Another major advantage is that the difference between rank 1 and 3 is generally quite small. The difference is usually about 4 storm silver ore per rank.

I only have rank 1 and some rank 2s, but I’m still very profitable. Unlocking the higher ranks requires you to pay using marks of honor. These are account bound and obtained through PVP. If you want to obtain them just go do some PvP on your favorite PvP character. You should also keep an eye our for any Broken Isles PvP world quests that can reward marks. Run through those on as many alts as possible, as the marks are BoE. 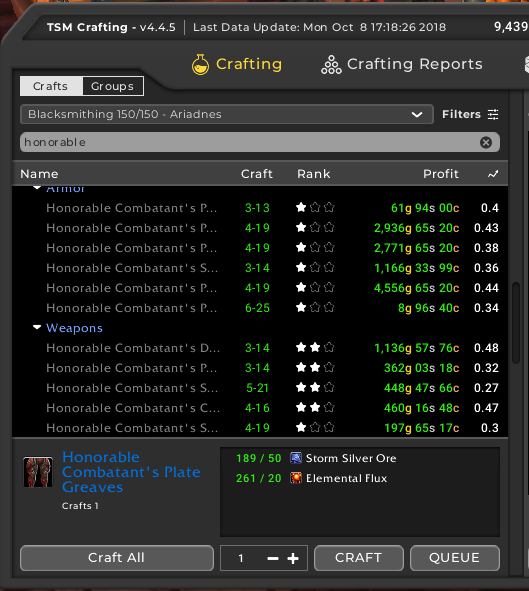 My experience is that the armor sells much faster than the weapons, so prioritize your armor recipes when buying higher ranks.

How much should you stock?

So far I have mostly been stocking up to 5 of each item. I just started increasing my stock to 10, and it’s going to be interesting to see if this increases my sales.

I suggest starting by focusing on the armor pieces, as these have performed best for me. Craft up to 5 each of these if you can afford to.

My TSM setup includes my BfA crafted gear operation. It includes some checks in case the variation in question does not exist. I also include an if clause that will increase your normal and maximum prices for the epic variations. As usual I post one of each item for 24 hours with a minimum price of 120% crafting.

One warning is that the group may not be complete. I keep making new variants that are not in the group, even though it’s based on muffins import. Every time you craft a batch it’s good practice to check that the new items are all in the group. You can read my TSM guide for a quick rundown of how to add items to a group.

The import string is in my pastebin.