This week went a lot better than the last one in terms of liquid gold. Mostly because I spent a lot less gold this week. I also hit 120 on my mage so No I’m working on Tortollan seekers rep!

I am finally back in an increasing trend for my liquid gold. I spent a lot less gold than last week, but my sales are almost completely identical with 1.33 million in sales this week. I spent 740k so my liquid gold increased by 600k this week!

My sales were slightly better this week compared to last week. I managed to get 1.3 million gold in sales, which is really good.

Most of my gold still comes from enchanting, some jewelcrafting and a lot of material flipping. I also have a good amount of sales in the Darkmoon Deck market!

We can see that the last half of the week was mostly just reposting my auctions. I will have to run some more material scans, and I will likely also have to do some real restocking tomorrow! 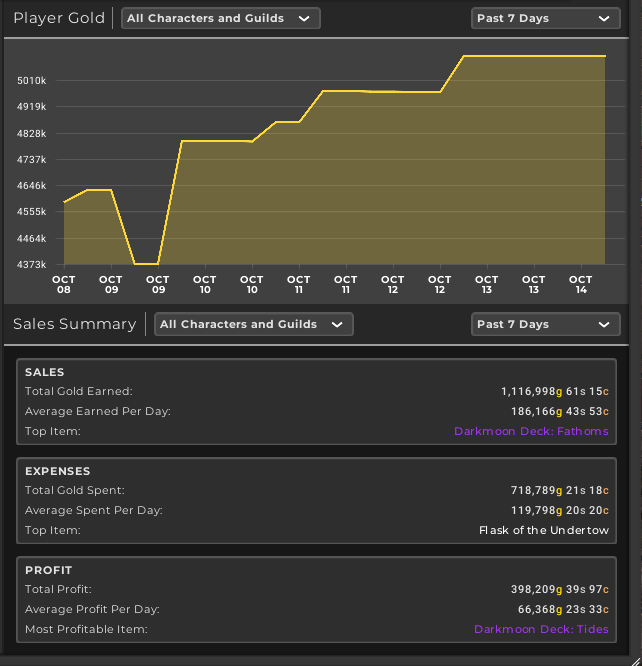 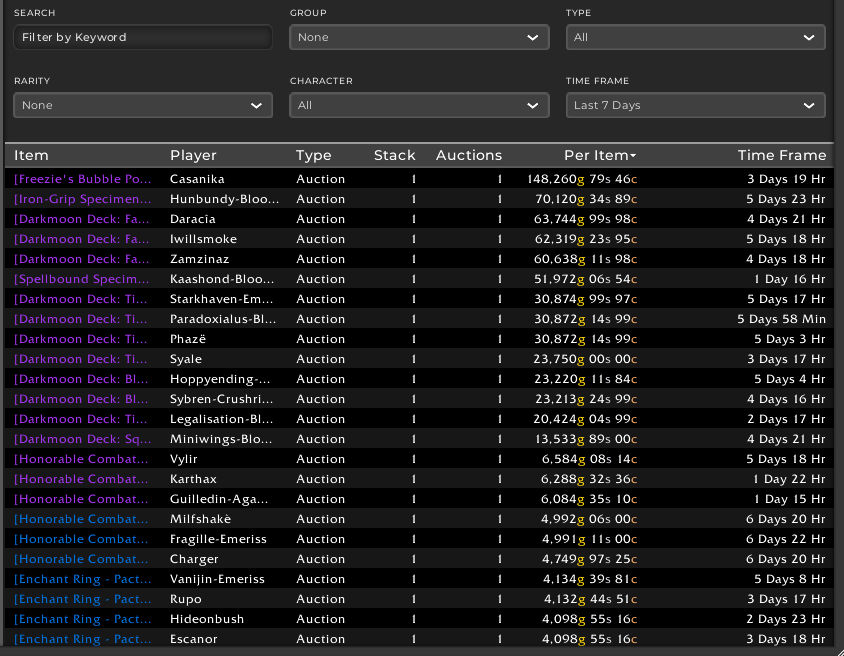 I sold three BoEs this week, so this market is definitely becoming more consistent. I have not really restocked any BoEs though so it will be interesting to see what I can sustain. Darkmoon decks are still selling really well, and I reset the price of the Tides deck from 15k, which has worked out really well. There were only 5 decks on the AH so I decided to take my chance with a reset.

I’ll be dipping my toes into the lower level non-Uldir BoEs as I have heard good things about this market. So wish me luck on that!

Honorable combatant gear is still selling well and brings in a nice amount of consistent gold for me.

Augment rune flipping is going OK. My profit margin is fairly thin, but sales are consistent. I will likely have to change my setup for this market a bit to really get some decent profit. Materials are still selling well, particularly the meats which continue to be the easiest item to flip in my experience.

Flasks are a lot less interesting as my settings do not give me a lot of sales, I will likely have to adjust my buying and selling thresholds down if I want to get some more consistent sales. My profit margin this week is decent, but the volume of sales is so low it is almost completely useless.

You can also see that my Darkmoon Deck: Tides reset worked extremely well. I sold 5 decks at almost twice the price I bought the AH out at! 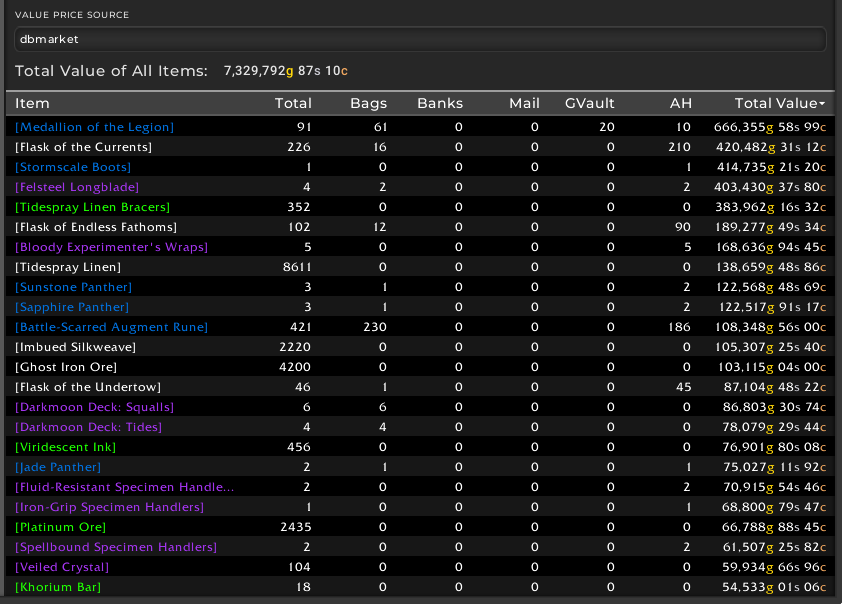 I still have a large amount of gold tied up into flasks.

Medallions of the Legion are also looking like a play that went really badly for me on this realm. I have been getting some sales on some of my other realm though, so I am considering buying more to bring my avgbuy down so I can sell with my current operation, alternatively I could reduce my price to increase my sales.

BoEs are still not tracked correctly here though, as my 395 Bloody Experimenter’s wraps are posted at 1 million, and then I have 4 others.