Today we will take a break from what to stock up for BfA to focus on another old world transmog market. I have covered a lot of crafted transmog markets lately and today I will be focusing on a great one.

The reborn weapons were added to the game in the Throne of Thunder patch of Mists of Pandaria. The items are new crafted versions of various classic vanilla and TBC weapons. They were very popular during Mists of Pandaria, and they remain so for transmog.

There are 6 different weapons with 3 stages with unique transmog looks. Each new stage takes the previous stage’s version as a material.

Why is this so good?

The biggest advantage in this market by far is the fact that supply has a hard cap. All of the crafts require Lightning Steel Ingots and these can ONLY be acquired from doing the daily cooldown craft. They are Bind on Pickup, and there is no way to accelerate the crafting. In addition to the daily cooldown restriction you need to actually head to the Thunder Forge on the Isle of Thunder in Pandaria to craft the weapons.

This makes the market quite a hassle and helps reduce the competition quite a lot. The profit margins are quite large as you can see below. 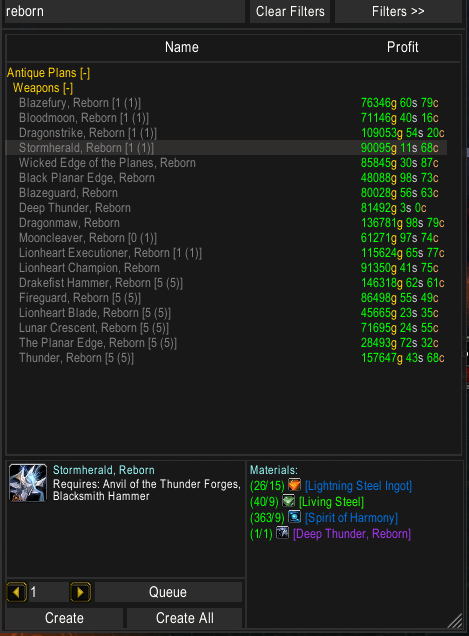 You learn the base recipes from completing the quest Lightning Steel. The quest is started from an item dropped from Itoka on the Isle of Thunder just outside the Forge. This will teach you the daily cooldown and the base versions of each of the 6 items.

Stages 2 and 3 are unlocked by crafting the preceding stages.

In addition to the Lightning Steel Ingots the weapons require two other materials: Living Steel and Spirits of Harmony. You can find both of these easily on the Auction house so using the default material value in TSM for these should be straight forward.

The limiting factor is the Lightning Steel Ingot. The stage 1 version requires 5, stage 2 requires 10 more and stage 3 require 15 more. This means a total of 30 Ingots per stage 3 weapon. You can thus craft about one Stage 3 Weapon a month. If you buy the finished stage 2 version you can craft 2 stage 3s a month.

Due to the soulbound nature of the ingots we might not want to use the crafting cost of the stage 1 and 2 items as the material price. Since we can’t just craft new ones without spending a very limited resource it makes more sense to use dbmarket as our material price. If we do this change the picture looks less rosy for some of the stage 3 versions as you can see below. 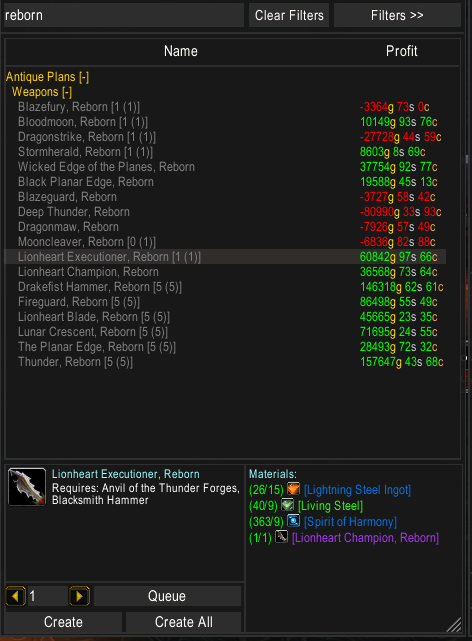 To change the material value head to the crafting pane of TSM and materials then you search for Reborn and replace the custom string with dbmarket or something similar. 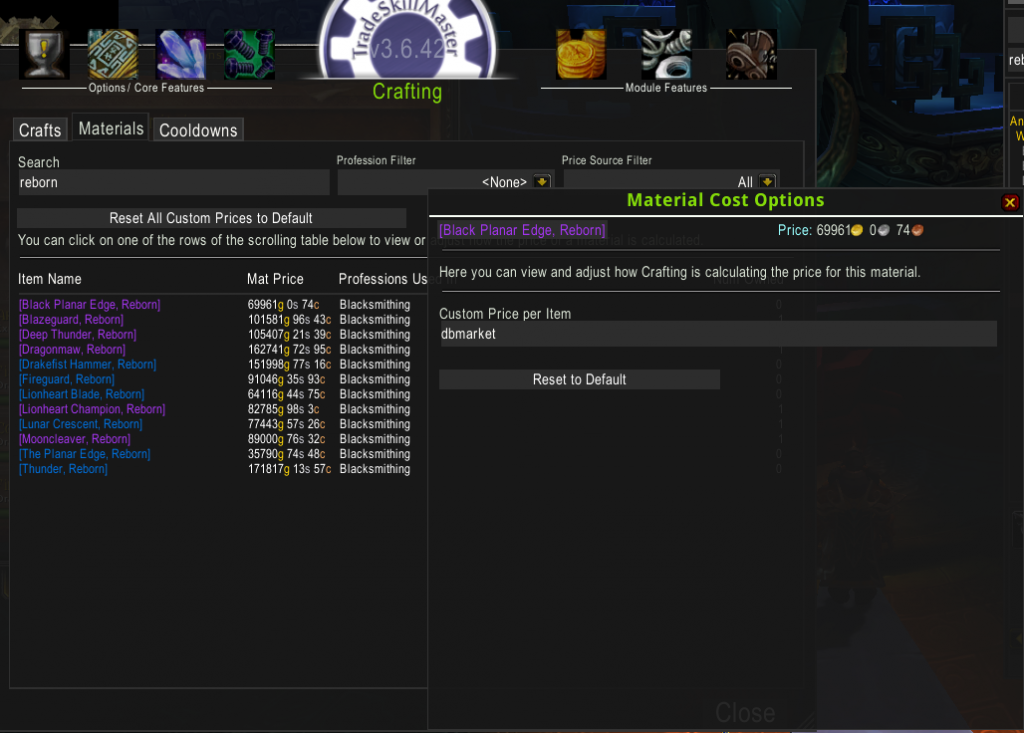 Since all of the crafts require Lightning Steel Ingots and these are highly limited you want to get the most gold out of each ingot. The weapons can be bought from the AH so you can potentially buy lower stage weapons to spend your ingots on the stage 3 versions or you can focus on the lower stages.

In general the stage 3 versions have the highest sale rates. The sale rates are also quite different across the items. The Stage 3 version of The Planar Edge has the highest sale rate out of all of them. You are unlikely to be able to stock all of the items unless you have several Blacksmiths. You will have to compare the prices of the three stages and the various items on your realm to figure out what will work best. Buying the lower stages will increase your supply of the most sought after stage 3 version at the cost of profit margins.

If we look at the profit margins on my realm we can see that some of the Stage 1 versions have absolutely ludicrous profit margins. 140k+ for both the Drakefist Hammer and Thunder. Of the Stage 3 versions only the Wicked edge of the Planes and The Lionheart Executioner make sense.

You will have to take a look at your realm’s prices to see which items are profitable and which are not. Since we will only be able to craft a subset it is crucial to pick the most profitable ones.

My TSM setup is based on the same framework as my other crafted transmog groups. I have updated my auctioning operation so I suggest replacing it when you import this group.