The Mists of Pandaria crafted PvP gear was a gold mine back in the day. The gear still sells quite well as transmog, and there is an absolute massive number of different items.

Why the MoP PvP gear

The biggest advantage in this market by far is the fact that there is a large number of recipes. You can easily craft up a ton of items and repost them every 48 hours. Even if you just do that you will likely make a decent bit of cash. If you have the time for cancel scans this gets even better.

The other major advantage is the fact that the recipes are unlocked through your daily cooldowns. This means that competition is very limited and the profit margins are usually massive. As you can see below even with just reposting every 48 hours roughly I made about 40k this month from my blacksmithing group alone.

What is this all about?

In Mists of Pandaria you could craft PvP gear that was great for starting out in PvP on a new character. The items made several full sets for various stat types. The recipes are all still in the game and demand is surprisingly strong. This won’t make you rich by itself, but it is a very nice addition of some transmog items that are incredibly easy to keep stocked. 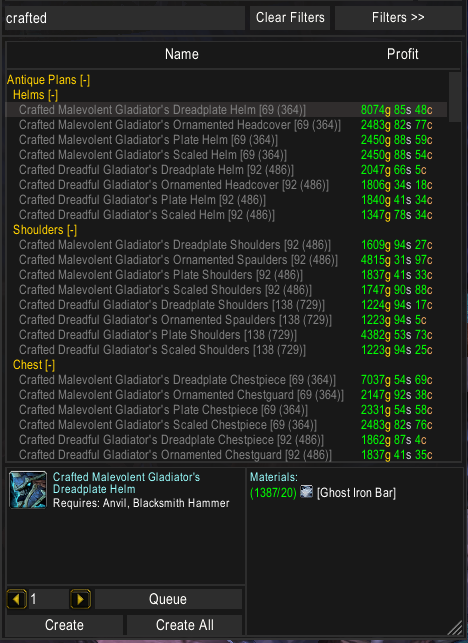 If you did not play during Mists of Pandaria you will have to put in some effort to learn the recipes. On the plus side going through the required steps will also give you access to crafting the “reborn” weapons which are extremely valuable as supply is hard capped by a daily cooldown which is bind on pickup.

There are two main sets of crafted PvP gear from MoP. Crafted Dreadful Gladiator and Crafted Malevolent Gladiator. You can unlock one recipe per day by crafting one of two daily cooldowns. For each of these tiers there are 4 different sets you can learn the recipes for, as well 3 shields.

The Lightning Steel Ingot will also unlock the recipes for the Reborn series of weapons which can be extremely profitable as well, even if they are outside the scope today.

Completing the daily cooldowns require 10 Ghost Iron bars for the Lightning Steel Ingot and one Trillium Bar for the Balanced Trillium Ingot. Every day you will learn two recipes, one from the Dreadful tier and one from the Malevolent. It will take some time to unlock them all, but the daily cooldowns are worth it for their transmog pieces anyway.

To craft the crafted dreadful and malevolent gear you require Ghost Iron Bars. The recipes only requires one material, which makes them very easy to keep stocked. If you have a miner I would look into smelting my own bars, particularly if you can find cheap spirits of harmony.

I have a TSM group which contains all the crafted PVP pieces. I use my regular crafted armor TSM operation for posting them. This is the same one I use for crafted 850 gear in Legion. All of the pricing settings are based on crafting cost. The group also contains a crafting operation which will restock up to one of each item.