The last week I took the full dive into Antorus BoEs. I didn’t jump in immediately, as my playtime is too sporadic. When a new raid releases prices are typically very volatile for a week or two. After I took the plunge results have started coming on, as those of you who follow me on twitter will now.

The approach is obviously very similar to flipping 101 BoEs. I buy items that seem like they are underpriced by comparing the price across item level variations of the same item. As there are 110 items the primary purpose of people buying them will be to increase the power of their characters. This can be for their mains, especially in the higher end of the item level bracket or for quickly gearing alts, in the lower end of the item level bracket.

I have spent about 1 million gold so far across my servers, and some of the items have started selling. As in other armor flipping markets I expect I need more inventory before sales start coming in regularly. Even so I have some quite successful flips with profits of 30k, 50k and 60k as you can see below.

I have used the same setup for purchasing Legion BoEs for most of the expansion. It is based on using TSM imported searches to look for deals, and then I have to use my judgment to decide which items I want to buy. For a look on how TSM imported searches work you can check out my earlier post.

TSM imported searches allow you to search for all the items that matches some criteria. There are an incredible amount of possible bonus IDs for raid gear (because of the warforging system). Therefore I find that it is much easier to buy using a generic search, rather than trying to create groups. The one problem with my string ist that it includes some Tomb of Sargeras gear, but I can easily filter those out manually.

When I search I look for items above item level 915. The string I use is:

Spotting the good deals and executing on them is more of an art than a science. I have highlighted two examples below to show you how I consider deals.

The first one below here is one I would shy away from. The gap up to the next one is smaller, and there are several on the auction House. I could take a chance and buy out all the 945 ones, but that is a bit too risky for me.

The picture below shows a deal that is OK in my view. I ended up buying it. It is not great, but right on the edge. We can see that the price is far enough below both DBmarket and DBregionmarketavg, that I can feel fairly safe that I will be getting some profit. 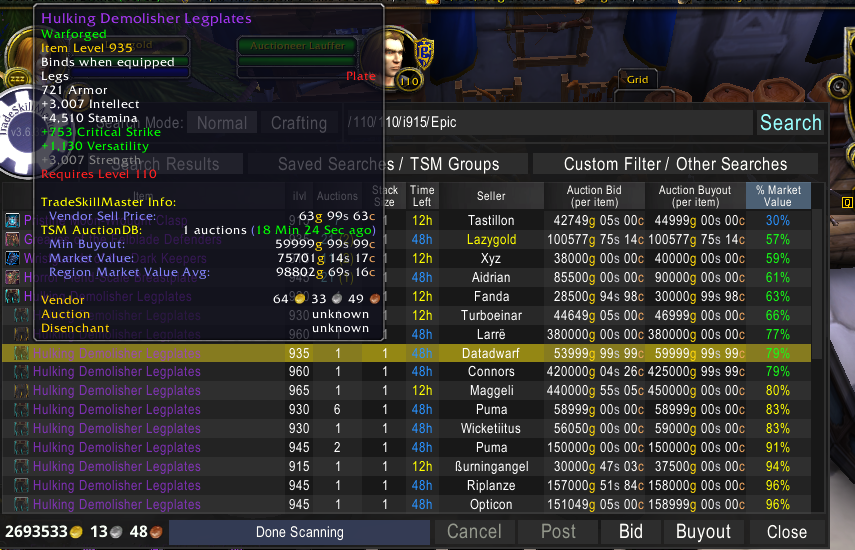 I am still using the same TSM setup as I have used for quite some time for selling the BoE items. You can find a fresh group structure in my Pastebin that has the operation applied and separate groups for 101 and 110 items, it also includes a decent amount of BoEs. I simply run post scans using these settings whenever my auctions expire and it has worked well for a while.