This week Uldir opened as well as mythic+. I was hoping to sell of my massive stockpile of potions, but as we will see that did not work out too well. It looks like some of the prices have gone up today though, so hopefully the mythic launch will put me over the hump.

This week I’ve been spending most of my time working on unlocking reputation on my warrior. I am about halfway to Revered on most of my reputations so rank 3 recipes are not too far off.

I leveled enchanting and cooking to get them ready for the raid.

I’ve also been keeping up with my purchases of battle potions on Monday and Tuesday, and trying to sell them after Uldir opened on Wednesday.

I’ve been selling enchants, potions and food and as you can see from the graph I have been making gold ever since the raid opened. Overall I got about 800k worth of sales this week, which is OK, but not amazing.

I spent less gold than last week though, but I’m still slightly down.

My AH value has increased significantly though, mostly due to the fact that I am actually posting my potions.

I’ve also just started leveling my mage to get to the rank 3 darkmoon card recipe. I’ll be leveling it alongside my DH as my top priority as soon as my warrior has all the rank 3s I need. 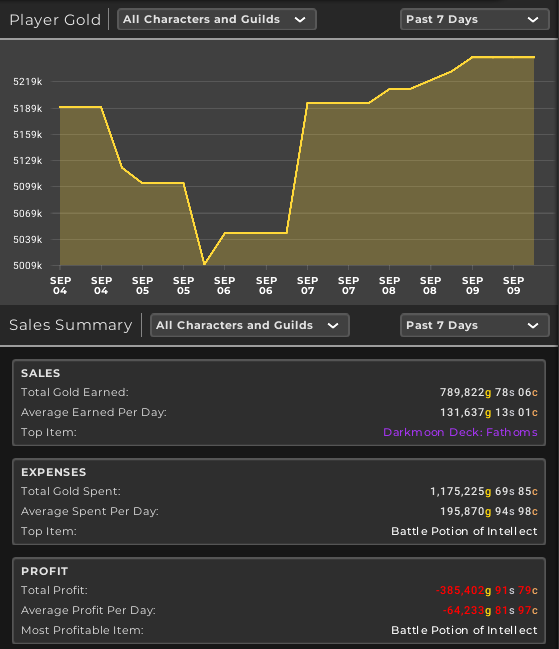 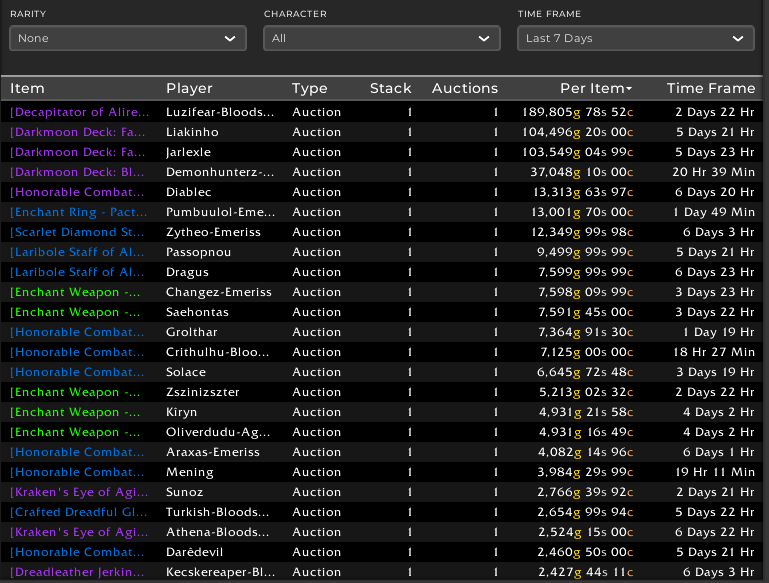 As we can see from the screenshot I had some very nice sales this week. I sold 3 darkmoon decks as well as several jewelcrafting staves and some Quick navigation enchants. I also sold one of my BoEs, but I actually bought the decapitator for more than 190k, so that’s a loss. At least I moved it.

I’ll be losing gold on the quick navigations overall though as I bought out a significant number of them to reset the auction house.

We can also see that the honorable combatant gear is still selling nicely.

I dipped my hand into some material flipping this week as well. I flipped about 1000 Stringy loins, where I easily doubled my money. I’ll definitely be doing some more material flipping going forward. I’ll be prioritizing herbs and cooking materials as these have the highest demands. 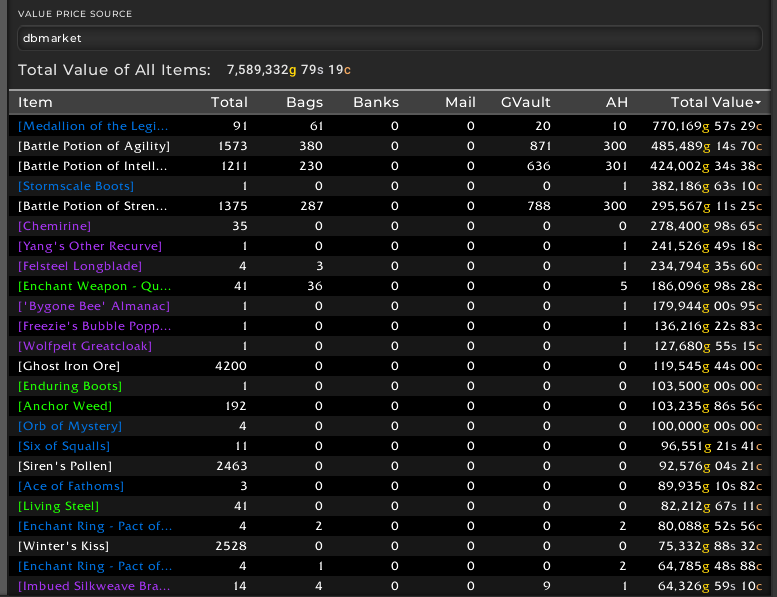 We can see that my Battle Potion stockpile is still substantial. I also have a lot of Medallions of the Legion, which have not sold well, but they will move eventually. Some BoEs and various materials round out the rest of my top value items.

Overall my inventory is looking OK. I need to stock up some more on enchants, but I am hoping to get rank 3s before I have to restock the ring enchants. I likely won’t get the quick nav rank 3 for a while as it is gated by a world quest though.