Darkmoon Decks has been the hottest and most talked about market in BfA so far. Profits have been high and the market can still be worth getting into.

As you can see from my latest gold cap challenge update I have been selling a decent number of decks. I am currently in profit, and while I expect the price to fall, I still expect a decent profit margin will remain as players jump on the next flavor of the month bandwagon. A lot of the bandwagoners will inevitably forget about the decks. 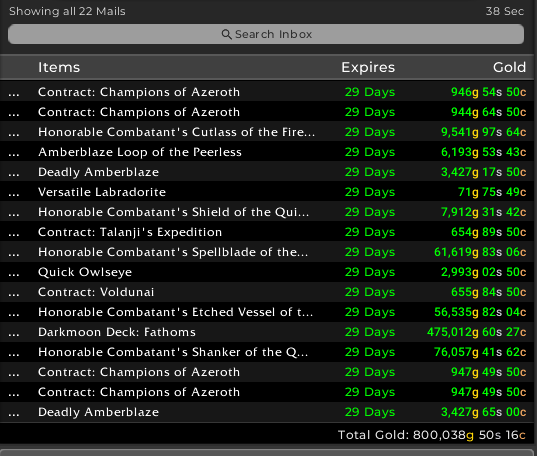 Some players will say the market is dying, but the effort required to make decks means that eventually the masses will find other markets to focus on, and profits will be on a good, but not crazy level. Unless blizzard nerfs the trinket into oblivion for some reason.

How does it work?

Darkmoon cards have been a staple of inscription for a long while.

You craft a darkmoon card and it will randomly turn into one out of 32 possible cards organised in 4 decks of 8 cards. If you have all the 8 cards in one deck you can turn them into a deck. The full deck is a powerful item level 350 trinket.

The item level and equip effects make them very useful and highly sought after.

The RNG of card crafting

Due to the random nature of the card crafting process you need to craft a very large number of cards to be certain you get a decent number of completed decks.

The 4 decks have very different prices as dps decks are way more popular than the tank deck for obvious reasons. As I outlined in my post on the RNG you should craft at least 1000 cards if you want to enter the market.

You don’t have to do this all at once though. Personally I expect to craft cards for a long time.

You need to level inscription to skill level 100 to get access to the rank 2 version of the recipe. The rank 3 version is obtained from the Tortollan Seekers at revered, and should obviously be a goal once you hit 120.

In addition to this you will need some way of mass producing Expulsom. The best way is either going to be Leatherworking or Tailoring uncommon bracers. Both are learned at skill level 1 and you cna quickly switch between professions depending on what is cheapest. 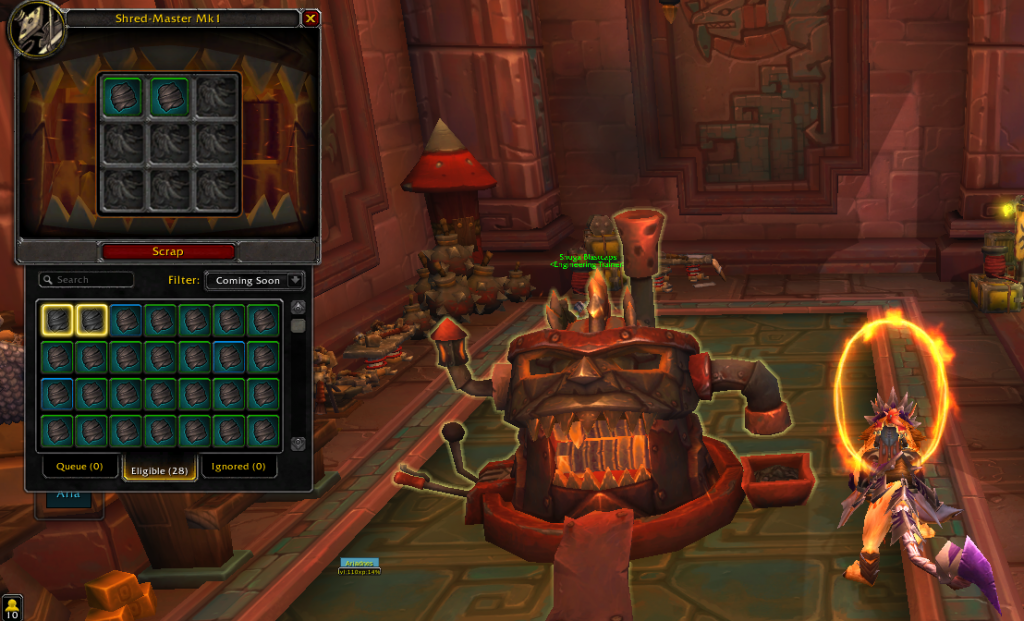 You then scrap the bracers at the scrapper for some mats in return and a 15% chance of getting one expulsom.

To speed up your scrapping I suggest getting the [url=https://www.curseforge.com/wow/addons/easy-scrap]addon easy scrap[/url]. It makes it very simple to scrap your items effectively.

You can buy the finished inks, buy Pigments to turn into inks or buy herbs to mill and then turn the pigments into inks. Typically it will be most profitable to buy your own herbs, but it does cost a lot of time. If you buy the inks or the pigments, your crafting costs are very easy to find. It’s just 10 times your price of pigments or inks per card.

Bilisonyxias milling data indicates that you need about 8 herbs per Viridescent or 3 anchor weeds. I round the herbs up to 10 herbs per viridescent to get a very simple idea of the crafting cost.

Together with a 10 card per deck long run average this means that an upper limit crafting cost per deck is roughly equal to the price of 1 000 normal BfA herbs plus the cost of ten Expulsom. It’s also extremely easy to calculate.

I suggest also rounding the price of expulsom up to something so you can quickly keep the total cost of decks in your head. I use 500 gold for expulsom which is actually more expensive than my current cost.

If your maximum herb price is 50 gold that would give you a rough estimate crafting cost of 55 000 gold including Expulsom.

The darkmoon decks are expensive and the market is quite saturated at the moment. Selling in /2 is an absolute necessity and will yield you more sales. This is also why you want to have a simple sum for the crafting cost so you don’t have to think about whether a deal is good or not.

I also suggest using a decent bid percent undercut to entice players who want to bid to save money to do so. I use 12 hours as the posting time in TSM as undercutting is very frequent.

Cancel scans are absolutely worth it, and are very quick as there are only 4 different items.

Herb prices are very different between realms, and they have not yet converged. As such I suggest using hard coded gold limits to figure out your crafting costs. I just added some more profit calculations to my spreadsheet for Darkmoon Decks, so you can easily find a rough estimate of the crafting cost.

The new rightmost column named Crafting Cost 10 Cards milling is based on the simplification of 1000 times the average herb cost. I suggest using a number larger than this as your minimum crafting cost. 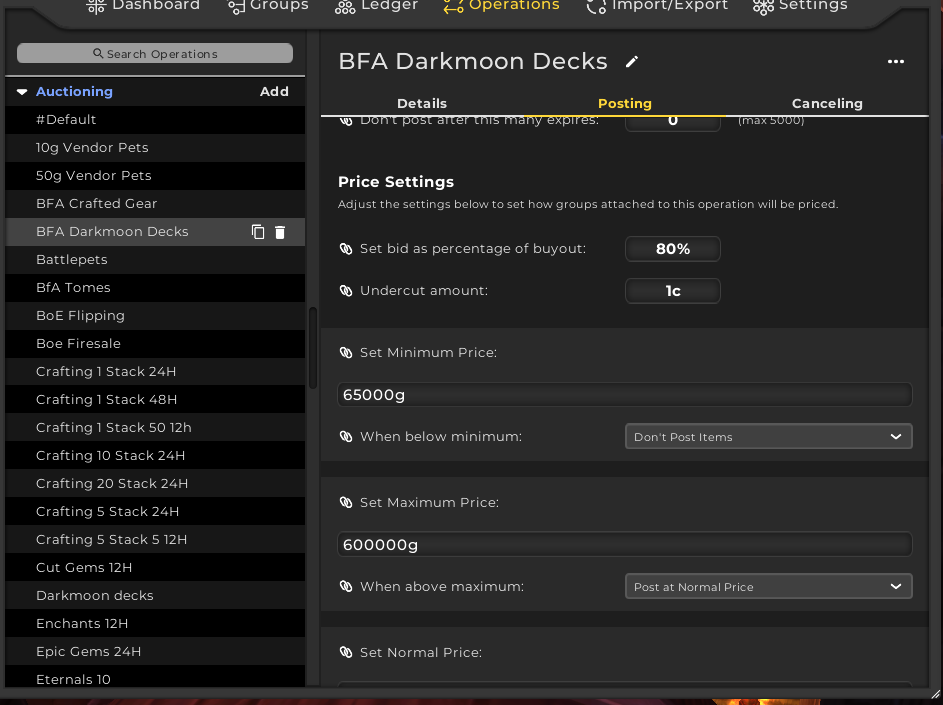 My current settings are in my pastebin. I strongly suggest checking the minimum price and adapting it to your realm based on the spreadsheet.

If you want to level up your gold making consider supporting my Patreon, and you will get all my TSM settings as I make them!