I already covered the Mists of Pandaria blacksmithing crafted PvP gear in an earlier post. Luckily there are more professions than just blacksmithing that has access to this type of gear. Today we will be covering the tailoring gear!

What is this market all about?

I suggest heading over to my blacksmithing post to get the simple rundown of this market. The general gist is that the items are desireable as transmog, and the same holds true for the tailoring items. The major advantage is that there are so many items you can craft that you are almost guaranteed to get sales regularly.

How good is tailoring?

Tailoring is sadly not as good as blacksmithing. The profit margins are generally quite a bit thinner and the price you can get for the items is much worse. On the plus side the crafting costs are incredibly low as Windwool Cloth is very cheap.

Keep in mind that my sales are on an extremely lax posting schedule. I do not do cancel scans at all, and my average reposting rate for the last 30 days has likely been about once every 3-4 days.

It is also very fast to restock as you dont need to spend too much time turning the windwool into bolts. You can even find bolts of windwool cheaper than the raw materials some times. 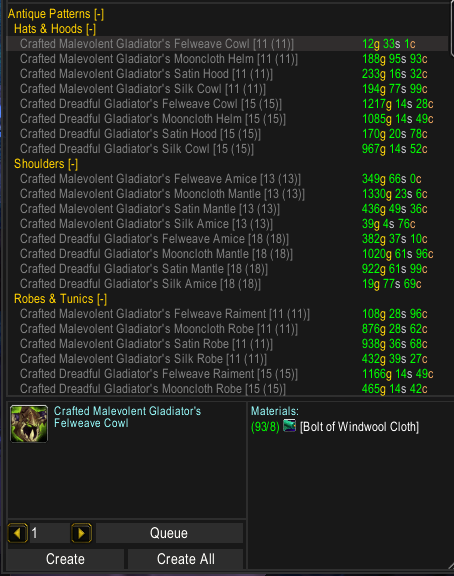 As we can see the profit margins are quite a bit smaller in absolute profits than for blacksmithing.

The recipes are unlocked the exact same way as the blacksmithing recipes. you obtain them from crafting two different daily cooldowns. Imperial Silk, which requires 8 Bolts of Windwool Cloth and Celestial Cloth, which requires 10 bolts of windwool cloth. You obtain the imperial silk recipe from any tailoring trainer as long as your skill is above 550. The Celestial cloth recipe is a random drop from Mists of Pandaria mobs. So just go out and slaughter the mobs closest to your factions base in Vale of Eternal Blossoms until you get it.

If you’re just starting out it will take quite a while to unlock all the recipes. You’ll require 90 windwool cloth per day for the daily cooldowns. Luckily it’s dirt cheap.

Keep in mind that the daily cooldown materials can be used for various epic recipes as well. These usually have pretty good profit margins as well and are generally well worth your time.

My TSM setup is pretty much identical to the setup I use for the blacksmithing group. I post using my general crafted armor operation and I use the same crafting operation to restock up to one of each.