Order hall gold is one of the easiest way to make gold in Legion. The Order hall mission table is a very potent and easy source of gold. If you are sitting on a large number of alts at 110 it is very well worth it to optimize your order halls. Off of my 2 characters on my old cap challenge realm I generate about 30-40k per week on average, and only one of them is maxed out at 950. This is just from running missions in using the Legion companion app on my phone while I’m out and about. 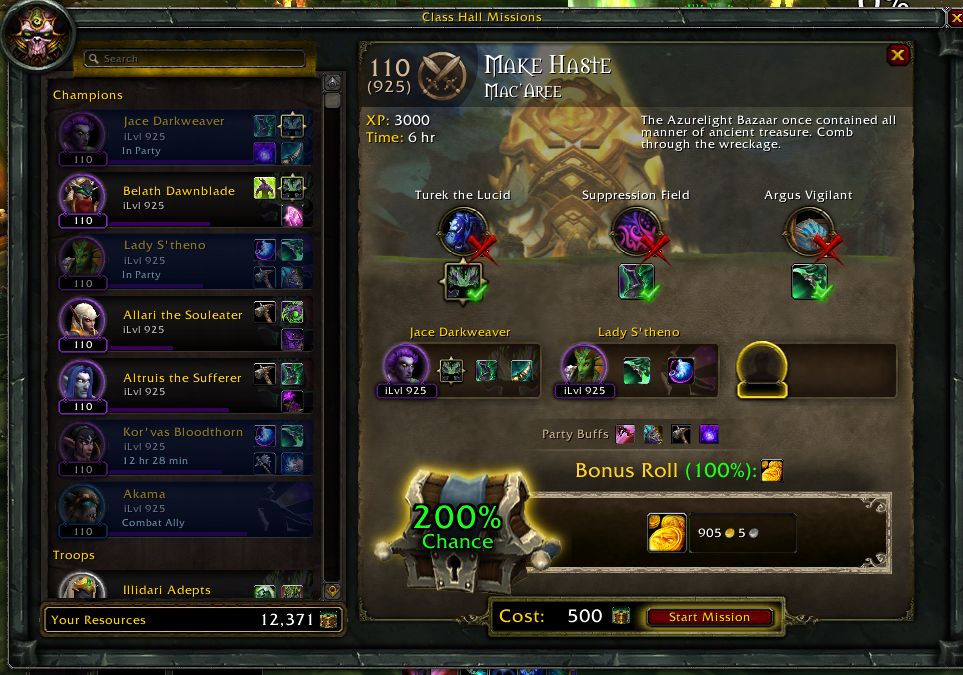 How passive is it?

This will heavily depend on how much time you spend playing your characters. The only real bottleneck for the order halls is getting enough order hall resources. The main way to obtain the resources are from world quests or from turning in Blood of Sargeras at the trader. One blood will give you 200 resources and this is easily the most profitable trade as one gold mission can cost 100 resources and give close to 3000 gold when maxed out at 200% chance.

The good news for players that don’t spend too much time out and about is that it can be close to self sustaining. There are missions that award Blood of Sargeras and if you can 200% them you will generate 600 order hall resources in profit. I have mostly been relying on these missions to keep my two characters supported.

Setting up your order hall

For setting up your order hall I will refer you to this great guide by redditor /u/polarthief which will give you the optimal gear and champion setup for all classes. To get access to all the champion slots you need to finish your order hall campaign as well as the armies of the legionfall content up to and including champions of legionfall. In addition to this you want to do the Argus content to eventually unlock full item level 950 champions as this will give you access to the most profitable gold missions. For a guide to the argus questlines check out this one on wowhead or this great post on the woweconomy subreddit by /u/kanemochi.

How I do it

I run all my missions from the app which means that I want my decision making to be as simple as possible when picking champions. My general setup now for my champions is one flat success chance item, one minus duration and one success chance for whatever secondary the champion is countering. This means I usually just match the secondary to the missions and fill up with whoever is available to get to 200% very easily. There are other ways and some are likely more optimal if you want to dive into it.

The Legion companion app is the lynchpin to this strategy as it enables you to spend very little of your in game time managing your missions. You can keep up to date throughout your day

Now get to work!

If you have any spare level 110 alts, get to work on setting up their order hall. There is still plenty of time left in the expansion to make a large amount of gold from this. The setup time for a new character is not too arduous, it should run you a couple of hours depending on how far along the questlines you already are.