If anyone of you have spent even a moderate amount of time prospecting in BfA you are probably sitting on a large pile of uncommon gems, and you may be wondering what the best method is to make some gold off of them. Today we will take a look at what you can do with these gems.

If you are unfamiliar with jewelcrafting I suggest heading over to my post on the profession in BfA. The main gist of it is that you can usually prospect platinum ore profitably, and most of the value will come from Kraken’s eyes and the Owlseyes. 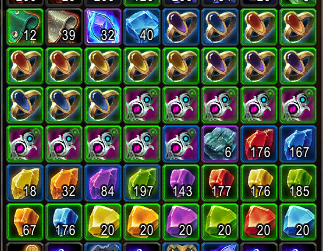 The uncommon gems will quickly pile up, as will some of the less useful rare versions.

There are several ways you can sell your uncommon gems, and you should be utilizing more than one method. The best combination will depend on how much time you spend prospecting, and we’ll take a look at the considerations. 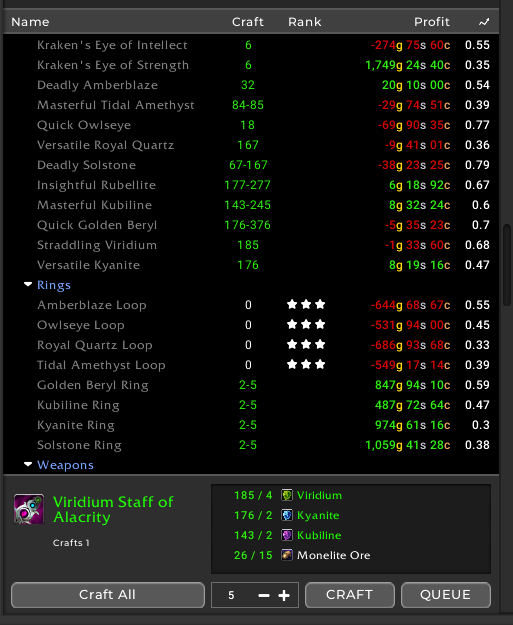 First though, we’ll list the potential ways to sell them:

I have mainly tested number 1 and number 3, but I am in the process of testing out the two others as well. From looking at the region numbers I expect all 4 methods to help you move some of these gems.

The uncut gems are useful for players leveling their profession, as well as for anyone looking to craft some of the weapons or rings. Demand is surprisingly strong on my realm, and I have been able to sell a nice amount of gems in stacks of 10.

Selling them as cut gems

I haven’t tested this out yet, but the sale rate is quite high for most of the cuts. I expect this will be able to move a couple of gems, but the volume will most likely be much smaller than how quickly you can move the uncut versions. These will be sold in stacks of 1 and we will use the exact same hard coded pricing settings here as we do for the uncut versions.

This is something I started testing out a while ago actually. The sale rate isn’t massive, but the profit margin is great. These rings are a great source of a guaranteed socket for players leveling alts. This will let them equip the 5 % XP gem if they haven’t gotten a socket as a random roll before level 111. On my realm they are currently selling for abou t2 times crafting cost, but quite slowly. There’s very little competition though, but I expect that might change.

This should also work similarly to the rings. Overall I expect these to have a lower sale rate as there are no guaranteed sockets, and this should make them less interesting than the rings. The item level will probably be a boost for some players though. On average 2-3 sell per day per realm, so you can probably make some gold here too.

If you want to move a large volume of gems you will have to stick to selling them uncut most likely. On my server they are selling for a surprisingly high price, which is quite far above the region value. The vendor sale price is 2.5 gold so the minimum price in all my settings is set to 5 gold.

Generally you will get a higher profit margin from the crafted items, particularly the rings, but that will not help you move hundreds of gems per week. If you prospect a lot you should definitely sell them uncut, as well as through all the potential crafts.

My suggestion for restocking levels would be to craft 5 of each ring and staff, 20 of each cut version of the gems and then keep the rest in uncut gems. As soon as you hit 200 uncut gems, I’d send a stack to your auction house alt to post it. This will give you a decent mix of profit sources and should help you move your gems through all of the potential refined markets.

I’ve updated my full JC group so it now contains all of the new sub groups for selling cut and uncut uncommon gems, as well as the crafts. The pricing settings for the crafted gear uses my regular crafting operation. As usual you will likely have to add some of the random variations to your groups for the crafts. The cut and uncut uncommon gem prices are all hard-coded, as the minimum price is essentially based on the vendor sell price. Feel free to change them if your realm has a significantly different market to me, but never set the minimum price below 3 gold as you are probably better off vendoring them at that point.