In the final days of Legion is the perfect time to spend some time obtaining rare recipes in the game for gold making purposes. Most of you will likely have conquered the raids or PvP objectives and you are more or less ready for the next expansion. One of the most profitable recipes in the game is the Vial of the Sands. Sadly it is locked behind an incredibly RNG-y grind. Today we will try to figure out how long we can expect the grind to be.

The recipe is found through archeology. Specifically through solving the tol’vir common artifact Canopic Jar. The chance of a jar containing the recipe is about 10% for characters with alchemy, and the chance of getting a canopic jar when starting a new artifact is around 12 %.

The drop rate from Canopic Jars was found through crowdsourced statistics in this wowhead thread. The chance of getting a canopic jar was posted in a comment on the vial of the sands recipe page here.

How long does this take?

The difference in time is quite staggering if you read through the comments on wowhead. I got mine in 3 jars, while fellow goblin and twitch streamer Shinn just got his on his 27th jar. So I decided to do some analysis to figure out how it looks.

I could probably have solved this analytically if I wanted to go into the math of the problem. I choose to make a simple Monte Carlo simulation model instead as it is in many ways easier to understand. It will also make it much easier to analyze the potential outcomes in terms of number of solves and number of jars you need to complete.

I wrote a simple python script that generates random numbers. Based on the percentages below we first determine if the next solve is a jar. If it is we draw another random number with a 10% chance of being the recipe at which point the loop quits and the number of jars and total number of solves are both recorded. I ran this 100 000 times to get a stable result.

The table below summarizes some of the main stats from the simulation. The mean number of jars is 10, which is the exact expected value. Perhaps the most notable result is the massive increase from the 90th percentile to the maximum value. The worst case here is REALLY bad. We can see that Shinn’s result of 27 jars has less than 10% chance of happening. 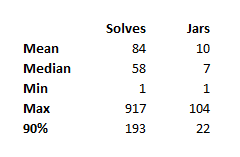 Below you can see the number of solves and number of jars plotted versus the percentiles. We see that the majority of players will get it done with less than 20 jars and less than about 200 total solves. 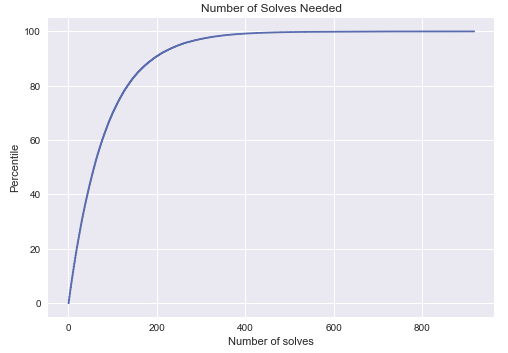 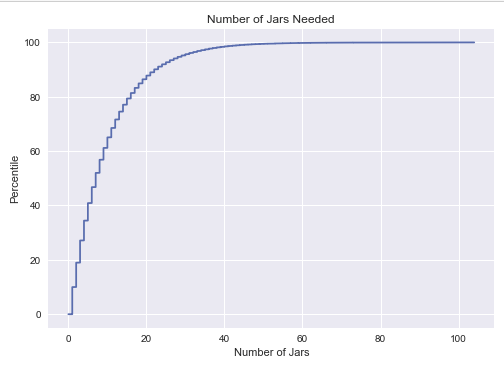 How does this translate into time? 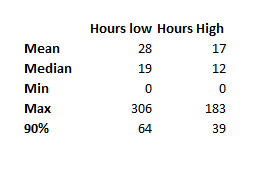 Overall I think this proves that the grind is not too prohibitive. The worst case is truly bad however with time requirements touching 300 hours. If you spent an hour per day doing this you would expect to get it at the end of the month. 90% will manage it in two months on a one hour per day schedule.

If you want to level up your gold making consider supporting my Patreon to get early access to all my posts.