My first week at 110 went well. I did a bunch of gearing and I added a nice amount of liquid gold.

I hit level 110 at the end of last week and I have spent most of the week getting into swing at max level. I chose engineering as my first profession as I want to try my hand at crafting the skull blasters for obliterum. I finished the quest line up to the point where I have the Boon of the Builder. So I just need to farm mobs for the container until I get the recipe. I have been buying up all the Hardened felglass I can. I have also been doing world quests and working on Nightfallen rep, for Enchanting. I still have herbalism as my second profession. I discovered an incredible advantage to engineering that I did not know about. I get access to an auctioneer in the engineering shop in Dalaran. As I only have one character for this challenge, it is an incredible advantage.

On the gold making Side I have very successfully tried my hand at flipping food this week. I also sold a 101 BoE. I dipped a toe into Obliterum by buying Versatile Maelstrom Sapphires that were underpriced and obliterated them. As you can see from the gold graph below I made it above 100k at my richest this week. 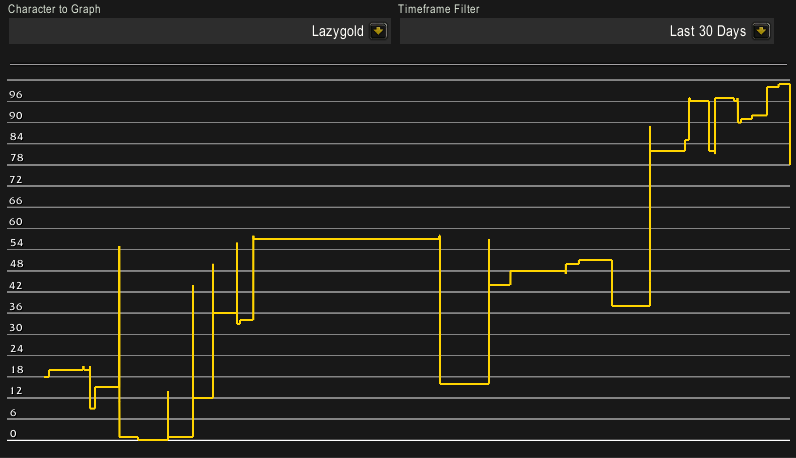 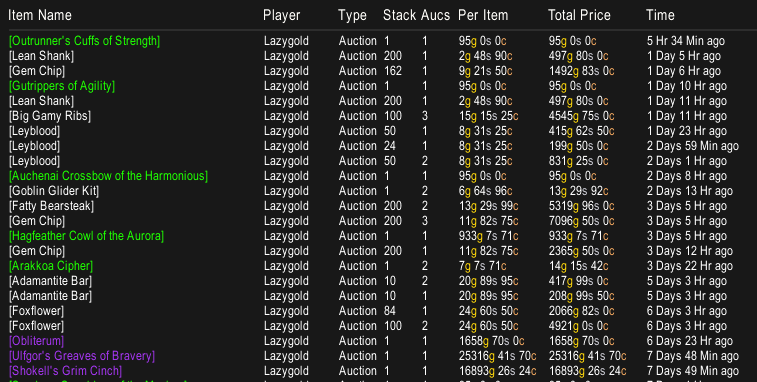 As you can see I sold a lot of stuff this week. I flipped a lot of Legion food materials and some foxflower. I also sold an Ulfgor and a Shokell for some very nice liquid gold infusions. I also sold out the rest of the Gem Chips from last week at profitable prices, which is great. Legion food is honestly even better to flip than herbs as supply is way more variable and demand is also extremely spiky. It’s a dream market. As you can see below I could flip tons of different foods for 26-146% profit. This is something I will keep up. 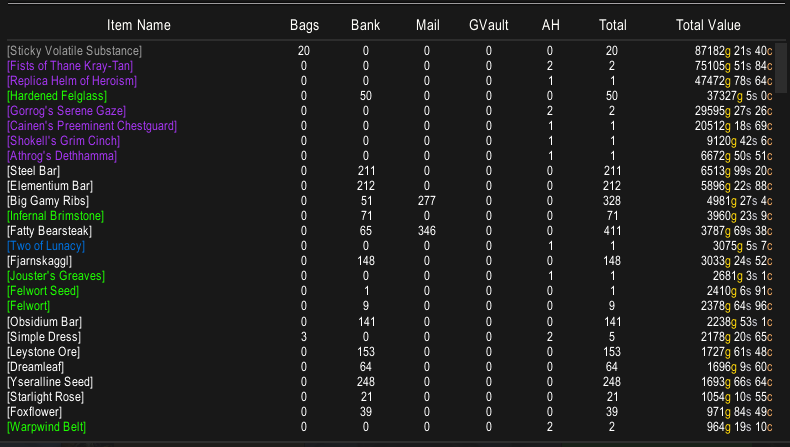 The most obvious item that stands out here is of course the Hardened Felglass. I have been shopping like crazy. I also have a good bit of Infernal Brimstone for the Skullblasters. I need to get more Brimstone at decent prices to really be ready for production. Outside of that I haven’t bought much, mostly sticking to finishing up the Engineering questlines and getting some gear to speed up world quests.

One thought on “Zero To One Million: Status Update 22”