Today I will show you what I considered when choosing professions, and my conclusion, which I think will surprise some of you. First I will go through the basis of what I am looking for in general. Then I’ll show you what detailed analysis I did, which was not actually that much. Stay tuned to the end of the post to find out who won the EU token.

What am I looking for?

I have about 50 000 gold on my character and I want to make one million as fast as possible. This means I want to get into fast-moving markets. As fast as possible. The main item I want to look into is obviously going to be obliterum. If I can find some way to quickly get ready to craft large amounts of obliterum profitably I will be in great shape. Other high demand markets I considered includes the enchanting shuffle, prospecting and milling.

So that’s the simple basics. I focused mostly on Legion recipes, but I would consider if the profession had any old world recipes that would supplement my income.

Before I looked at any prices I eliminated two professions: Blacksmithing and Tailoring. The reasoning is fairly simple, none of them can easily produce obliterum or enchanting materials (rank 3 recipes are WQ gated). The other reason is that they are completely dominated by leatherworking. The recipe types overlaps with leatherworking. 850 gear or low level gear only useful for shuffling, but leatherworking has access to two armour types and is therefore much better.

I also disregarded inscription as it would take way too long and require way too much capital to craft darkmoon decks, and glyphs just don’t sell fast enough.

Figuring out the best ones

Now let’s take a look at the others. 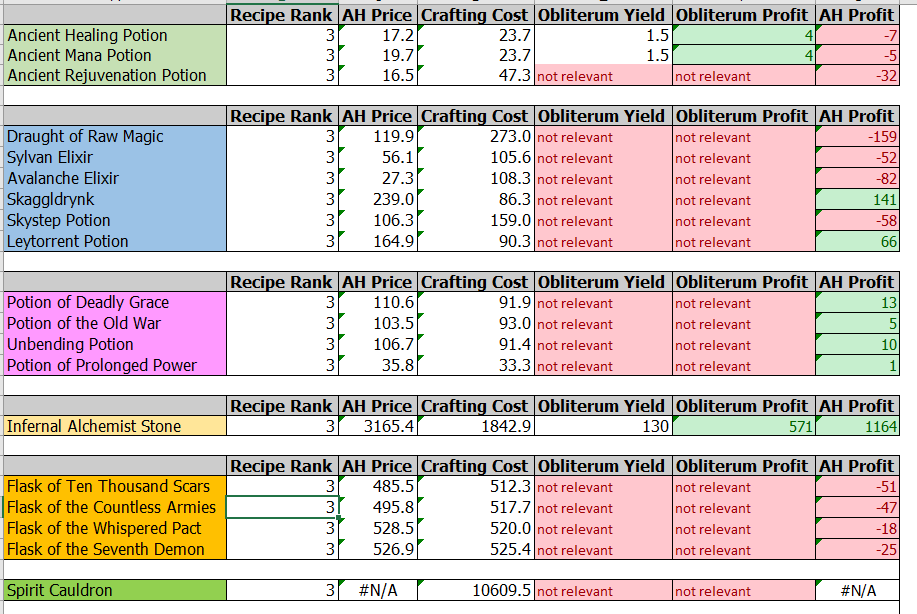 As the screenshot clearly shows alchemy is terrible on my realm. Profits are almost non-existant even at rank 3 recipes. I would not even have access to the rank 3s initially, so alchemy is a complete no-go. 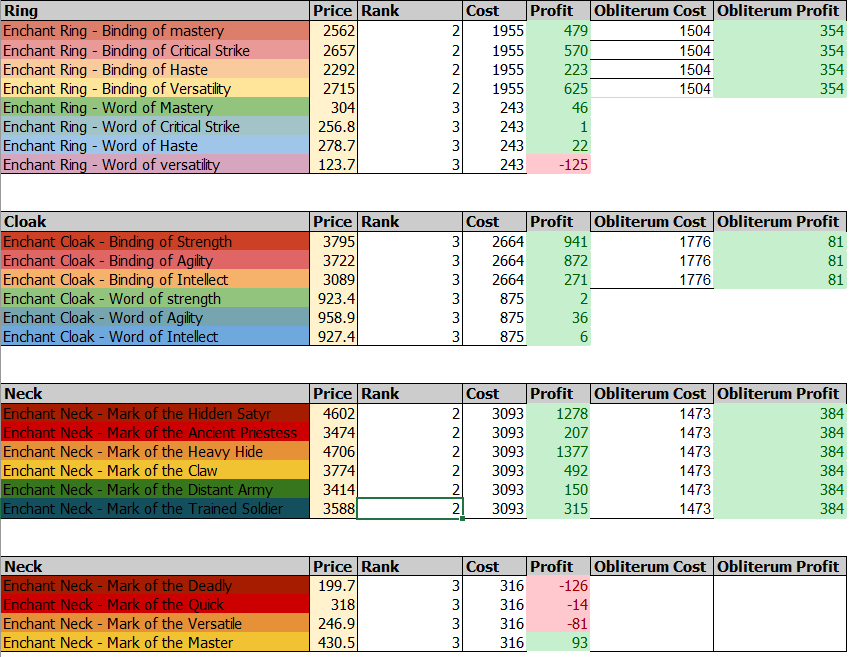 I focused on the rank 2 recipes for enchanting. Rank 3 recipes for the bindings is locked behind exalted rep with the Nightfallen and with the Dreamweavers and will not be online for a long while. As we can see rank 2 recipes can be profitable on this realm, so Enchanting is definetly a strong possibility. It will also enable me to shuffle enchanting materials and blood of sargeras if I choose leatherworking as number two. The image shows some very decent possibilities both for crafting enchants and obliterum from them. 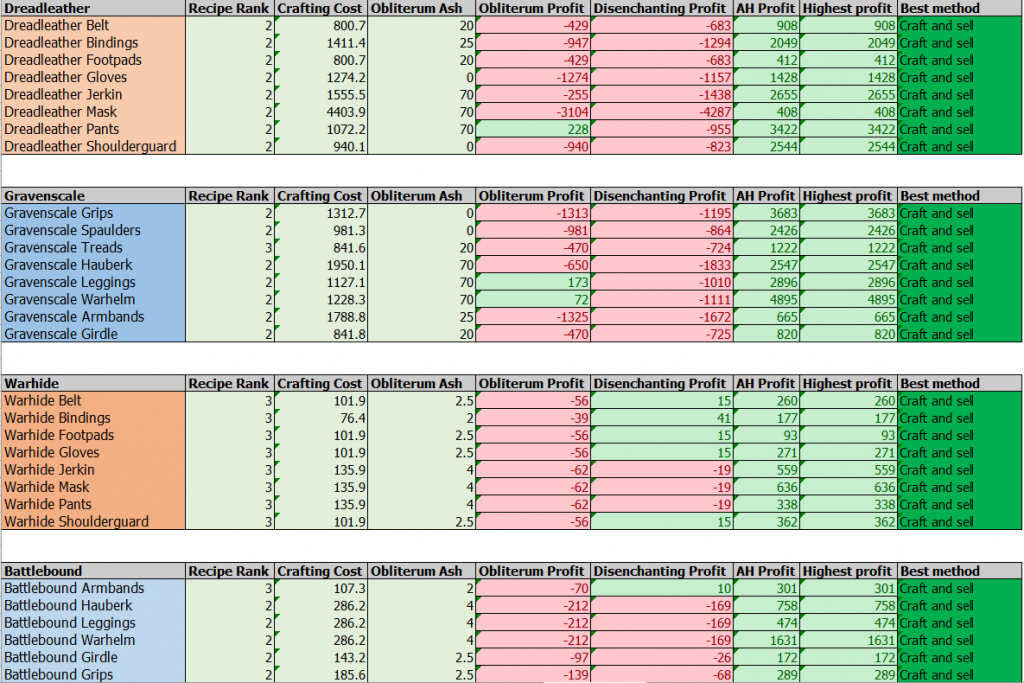 Leatherworking is only something I would consider if I can shuffle leather into enchanting materials profitably. Preferably at a large profit as the process is very time consuming. I focus on rank 3 recipes for the bracers (Warhide and battlebound), and rank 2 recipes for the 850 gear. I will most likely not be able to source enough bloods to craft anything else than bracers and gloves at item level 850. The Disenchanting profit for warhide bindings is very nice, at 41 gold per bracer so I consider leatherworking a strong candidate if it is combined with enchanting. Some of the 850 recipes also show strong profit margins so in total LW is a good candidate.

I don’t really have a screenshot here, as I don’t have engineering in my spreadsheet yet. What I know about engineering is that the skullblasters recipes all obliterate to between 500 and 600 ash. So I made a page to calculate the crafting cost of the various skullblasters when buying all materials from the Auction House. One of the reasons these recipes are so great is that they only have one rank. They do require you to finish the engineering quests, but that is about it. What I found is that the crafting cost is between 5 000 and 6 000 gold depending on the type. This would put my obliterum cost at about 1000 gold or lower. When the Obliterum price is 2000, this seems like a no-brainer. I also know that some of the reaves modules sell. And I kind of want to test out Engineering. I will also get access to some old world mounts that can boost my income. The one potential issue is getting enough Hardened Felglass as this is not a material that is to easily farmable. 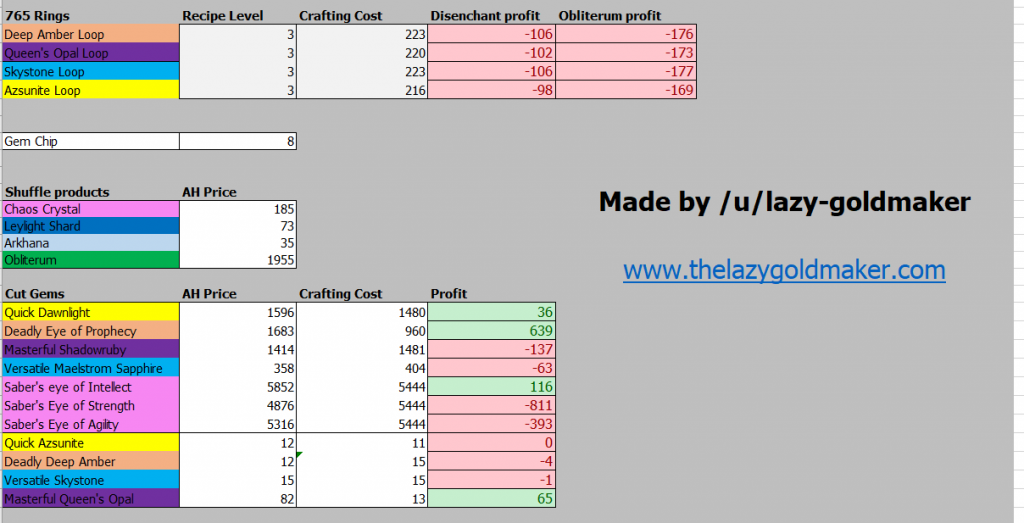 For Jewelcrafting we see that the profit margin from prospecting is quite healthy. Just by selling the raw gems I could expect about 50% profit on Leystone Ore. This seems like a good opportunity on paper. My experience with JC on my main realm lately indicates that You won’t sell too many gems at DBmarket, most of mine are sold below. We can see that most of the 850 rings are most likely profitable at rank 2 as well. Overall Jewelcrafting looks like a decent choice. If I could farm more Bloods I would likely be more interested as I could leverage them to craft finished gems.

Based on the above analysis I decided on Engineering as my first one. This means that Leatherworking is less valuable as I won’t be able to shuffle. I don’t really fancy shuffling leather anyway as it’s so time consuming. I’m going to do engineering first and then I’ll add enchanting later. This will give me great access to Obliterum and the ability to sell enchants at rank 2. I prefer enchanting over jewelcrafting as I won’t have to contend with uncut gem prices being low and the RNG involved in prospecting. I also like Enchanting for the Obliterum possibilities. It’s going to be very interesting to see how engineering does outside of the skullblasters -> obliterum chain. I think engineering was not on anyone’s radar, but I wanted to take a look at it. Incidentally this means I started on adding it to the spreadsheet, so stay tuned for me adding the rest of the recipes.

So the Winner of the EU token give-away is Tek. I’ll send you my battletag through the e-mail provided with your comment so you can add me. To get the token you’ll have to create an alliance character on Sylvanas, and I’ll come pick up you up and fly you to the AH so you can get the gold and buy a token.

5 thoughts on “What professions will I choose?”