Hey guys! Update 19 on my challenge is now live. I’m headed out for another week of vacation today so I will be away the next week.

This week I have been leveling through Legion. I swapped my professions to herbalism/mining to maximize my gold while leveling. Node density is surprisingly high in Legion.

I bought up a ton of ores that I’m trying to sell as bars. In addition to this I have been jumping head first into the Legion 101 BoE market with quite a bit of success. I’va also tried my hand at flipping gem chips, which has worked very well. Overall the week has been pretty great as you can see from my gold stats. My sales this week have totalled over 150k gold, mostly through 101 BoEs. 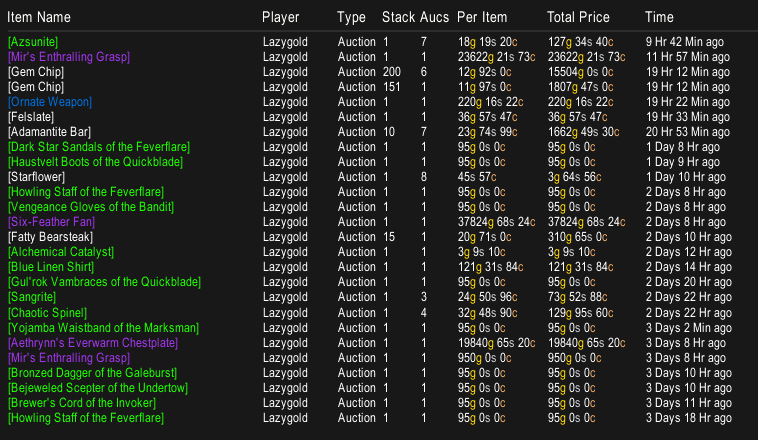 I had so many sales this week I had to split it up over to screen shots! All of the leveling greens have started moving way faster now that I’m just posting them all at about 100 gold. I also sold several BoEs as you can see. The Mir’s I sold for 950 gold was a level 99 item level 749 one that dropped for me.

I have still been flipping gem chips and a batch of foxflower as you can see from the list. I’va also sold the results of what little prospecting I did.

You can see my resale summary below. Don’t be fooled by the skyhold quickblade, which was just from a vendor. The Mir’s is incorrect as well. The one I bought for 14k sold for 22k bringing in about 8 000 gold in profits. The Six-Feather Fan sold within hours of reposting it so that was really cool. Not sure why the Mavanah’s I sold did not show up in the resale list, but I bought it for 20 000 and sold it for 33k. 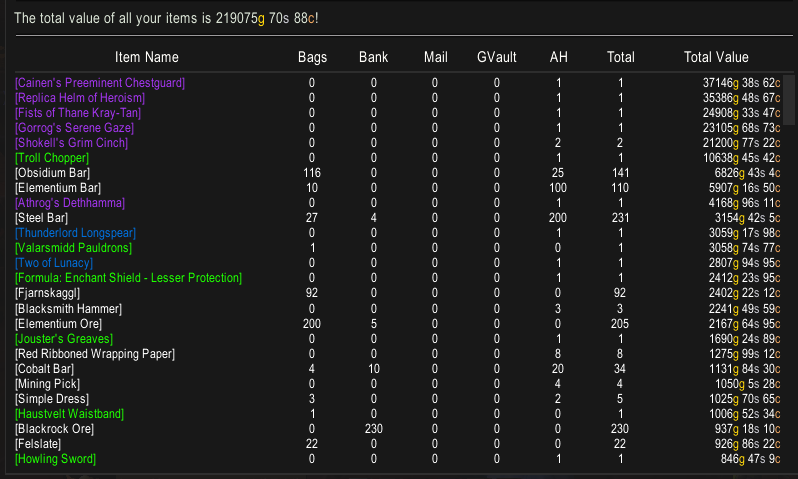 My inventory value is very slightly up, and I have a good lineup of 101 BoEs. I also have a lot of ores and bars that will sell slowly over the coming weeks. Honestly not too much to say here other than the fact that I am clearly moving in the right direction.