This week one of the more anticipated features announced in conjunction with Battle for Azeroth went live: Allied races. You can now start leveling a character from one of the new races as long as you have pre-ordered Battle for Azeroth and you have the pre-requisite achievements. The character starts at level 20. All this means that there are a ton of people leveling new characters. This represents an amazing gold making opportunity. 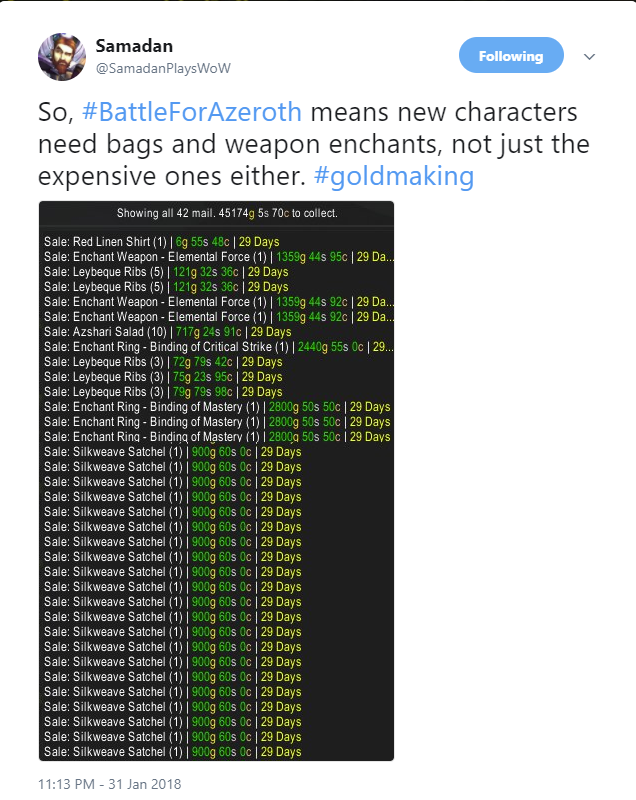 The screenshot above shows how Samadan has done with the release of allied races (you can find his twitch channel here). As you can see he has been selling a ton of Silkweave satchels.

It’s pretty simple really. Anything that gives an advantage while leveling or that you would want for a new alt is going to sell well. It’s time to dust of your tailors and get some bags posted. You can also see that he has sold some old world weapon enchants, which is very nice. I have personally not been too active in any of these markets, except for hexweave bags.

Don’t be afraid to advertise in trade chat if you find some item that is useful while leveling that people might not be aware of. Anything that increases the power or speed of low level characters will have at least some demand and can likely be sold for a profit.

Redditor /u/xCAMPINGxCARLx has written two very high profile posts lately about boosting lower level dungeons for money. With the boom in characters people want leveled and the extra character slots this is definetly a market to look into. The new scaling in low level zones also makes this a much more efficient proposition than it used to be.

This is not an established market at all which means you need to do a healthy amount of advertising and negotiating to find clients. Advantages include the fact that you can combine transmog farming and boosting for money. I suggest reading through his post to get a bunch of pointers on how you can go about doing this.

Some tips from me include:

There are a lot of opportunities to take advantage of currently. If you can figure out some new of packaging this then channel your inner entrepreneur and head to /2 to sell your stuff. The only limit is your imagination!

One thought on “Profiting from allied races!”