Blizzard just released some very surprising hotfixes for patch 7.2.5. Atleast they were surprising to me. I have copied the interesting parts of the patch notes from our friends at mmo-champion and pasted them below.

Blizzard already did this once back when patch 7.2 launched where crafted gear went from 815 to 835. This time it was sadly unnanounced. As we would expect from these changes crafted gear is now vastly more attractive and so is obliterum. Even though Blizzard has tried to keep the pre-hotfix crafted gear relevant by making the upgrade cost the same in practice people will only be buying the new 850 gear. As I just found this out today I have not had time to prepare. If you have a lot of obliterum then I truly envy you.

So let’s take a look at what we can do.

If you have been into the 835 market now is the time to go ham on 850 gear. Most especially Darkmoon Decks. The high crafting cost for the decks means that many people will not have enough cards or materials to crank any out. I was actually the first one on my realm when I posted decks after work earlier today. I suggest getting into it and crafting up good batches of all of the 850 items you can craft. Jewelcrafting rings should also give very strong returns.

Materials have already started rising heavily in price so I would suggest altering your TSM settings to increase your profit margins. You should increase your prices pre-emptively, especially on 850 gear. As I have covered earlier the 835 gear has been a great seller and I suggest stocking as much 850 gear as possible.

I’m pretty sure the main obliterum train has already left the station. The Region EU price has tripled since Monday. There’s a lot of Obliterum available as well, but material prices are up across the board, especially on enchanting mats which is one of the easier ways to get Obliterum. Definetly there is still a lot of profit to be made here, especially if you are flush with materials. I suggest diving into all the methods for Obliterum that have been used. Umren has a good video on a lot of the low ash crafts that you can find here. I have always preferred enchanting as it requires way fewer clicks. Alchemy trinkets can also be a good source if you have the bloods available.

As we can see from the screen shot below even though the price has gone up, the supply has followed suit. I think we should not expect the price to hold for particularly long, but I might be wrong. It depends on how many people are farming materials versus how many people are buying obliterum. The price of Chaos Crystals has only increased by 30% and the same goes for Arkhana. The quantity available is going down for both materials however, so short term expect the material prices to keep rising. 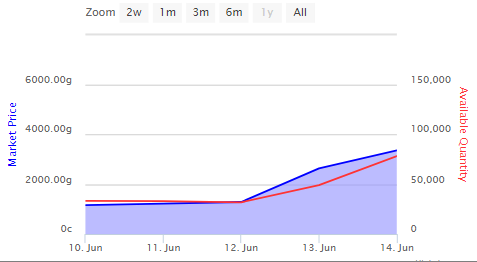 Take advantage of what price spikes you can. Don’t go overboard buying materials at 300%+dbmarket though. I will personally be crafting as much as I can particularly in the 850 item level bracket as I expect competition to be lower than in obliterum. Sadly I have not been keeping up well enough with buying Enchanting materials, so I won’t be selling too much obliterum. Happy hunting!