Tradeskillmaster 4 was recently announced by the TSM team. I am obviously a huge fan of TSM, so this is extremely exciting.

Today we’re going to talk about TSM and why I am such a fan, as well as some speculation on what might be included in TSM 4. My long term memory isn’t really good enough that I remember the leap from 1 to 2 or from 2 to 3. I do remember the first time I found TSM and realized that this was definetly the addon for me.

My history with TSM

Through the help of google I have figured out that TSM has been out at least since the end of Wrath of the Lich King. I got my start in gold making during Wrath, specifically jumping on the glyph bandwagon.

Before TSM, Auctioneer and QuickAuctions were the addons of choice for AH play. And while they could get the job done, none of them were at the level of TSM.

My first foray into TSM was amazing. I had just started realizing the power of crafting for making gold and automating posting settings to work across items was a major milestone. I have always had an affinity for logic, so the set-up was quite intuitive for me. (Lucky Bastard). I didn’t play WoW too much during Cataclysm, so I only used it in fairly small scales, but I was absolutely amazed at what it could do for me. 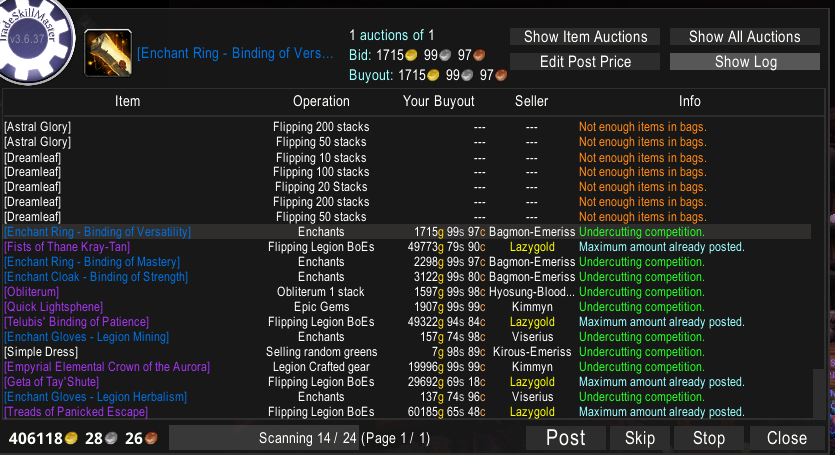 For me, the core of TSM is the auctioning interface. It is the main feature I use and by far the biggest advantage of the addon.

The first time I had a large scale gold operation running was during Mists of Pandaria. At the time I was using all of the crafting professions in the game to make gold. I had a pretty good TSM set/up, that used crafting operations, mailing and auctioning to effectively move a lot of product. I learned by doing and by reading the gold bloggers of the day.

During Legion have gotten much better at TSM. My operations use more refined pricing settings and a wider variety of price sources and stack sizes. I have also started flipping pets cross realm and I do BoE flipping on 7 realms using my core setup.

Why I love TSM

The simple reason is that I can outsource my decision making to preset rules. I can create rules that guarantee that my operations generate a profit. This is such a massive time/saver it cannot be overstated and it allows me to have a very large operation.

Decisions come in a lot of flavors in Gold making. Examples include:

Using my TSM settings all of these questions can be answered dynamically. You can find all the settings I have published in my pastebin. The answers change over time and TSM can keep your operation running smoothly.

What features am I hoping for

My gold making is so tied to TSM it is hard to find issues with the addon. I can’t really envision anything more or less in terms of functionality. In terms of one server, oone account gameplay I do not think there’s much that’s missing. While I agree with people that the addon can be inaccesible I do not personally think that is a major issue. It is after all also the biggest selling point. It is inaccessible, because it is so extremely powerful.

There are some features I personally would love to see. Most of this is very much in the nice to have realm and is definetly only useful for more practiced goblins. They would definetly improve the addon for me personally.

The ability to use more complex mathematical formulas to create pricing sources would be very interesting. You could use this both for making shopping decisions and for posting. I don’t have any use cases off the top of my head, but I have a significant background in statistics, so I am sure I would find one.

This is very much tied to the last point. I have two accounts and if I mail gold from one to the other it is listed as an expense. This makes the accounting summary pretty useless. Just look at the screenshot below. 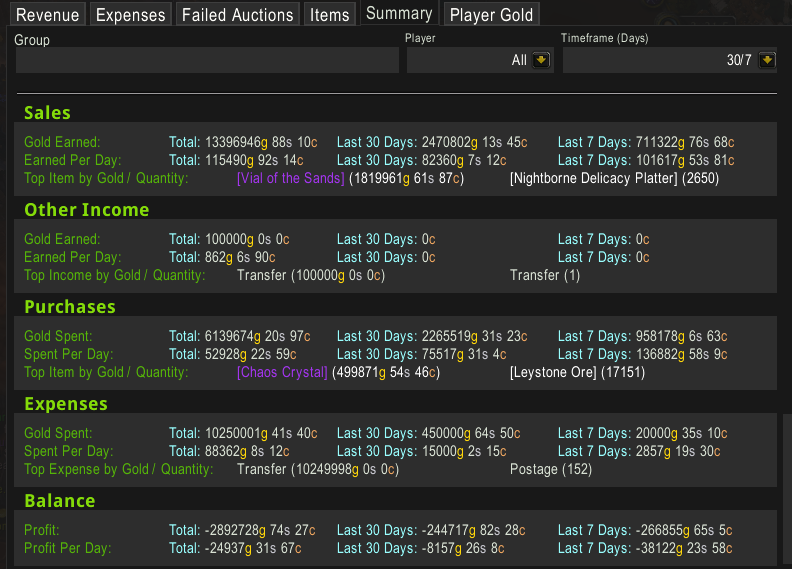 Support for more than 5 operations

I have just recently started experimenting with multiple operations for the same item. If you are running a large scale material operation 5 operations becomes too little quite fast actually. I think support for more auctioning operations for a single group would be very nice. 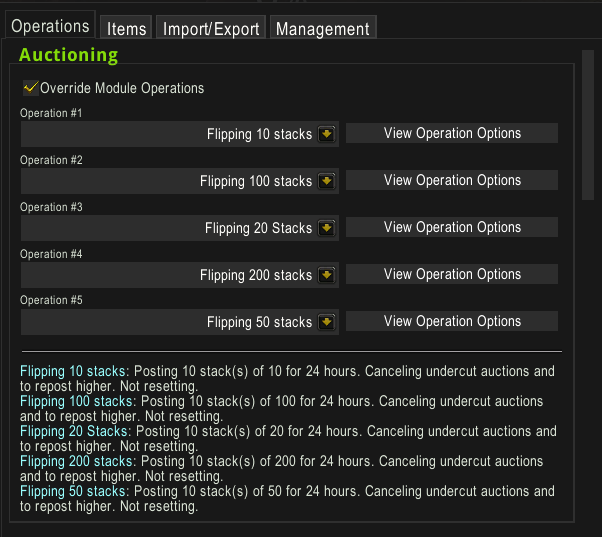 I am extremely proud to be an affiliate partner with TSM, and I am very exciting to see what version 4.0 has in store for us. I will likely be writing a full guide series as soon as we get the new version, although it depends on how far out the launch is. It’s about time for an up to date written TSM guide.

If you like my blog, you should follow me on twitch and twitter because it will give you a live glimpse into my gold making adventures.

7 thoughts on “TSM 4 Speculation and a retrospective”