As anyone following me on twitter will now I reached one million gold on Tuesday this week! The challenge has officially been completed! I will look through some of my stats throughout the challenge this week in addition to what I did since the last update.

Going forward my plan is to continue my work on Twilight’s hammer. I will most likely just transition the challenge into going for gold cap. My plan is to do it with the same setup, but I will be leveling at least a demon hunter to get 4 professions. It’s already level 101 and I will be going alchemy/leatherworking on it. Alchemy to get access to more consumable now that Antorus is coming up and leatherworking for the shuffle.

Statistics (taken when I hit 1 million)

How did the challenge go?

It’s time for a bit of a retrospective on my challenge. It took my 6 days and 11 hours of played time over 32 weeks to go from having nothing on a realm to one million gold. I spent the first 21 weeks of the challenge getting to level 110. At that time I’d played 2 days and 23 hours, which is less than half the play time I had. I spent a lot more time per week on the challenge once I got to max and into gold making activities.

When I hit 110 I had 51 471 gold. That’s a very respectable number. I did not get this from pure leveling as I spent time working the Auction house all the way from the beginning. At that time I also had auctions posted for a total value of 637 000 gold. My inventory consisted of  7 BoEs and a lot of trade skill materials both from Legion and the Old world.

Below I’ve graphed my Auction House Value and my weekly sales over time. As you can see I have a very impressive exponential graph. One my weekly sales passed about 100k my auction house value started ballooning like crazy. The same thing happened to my sales. The explosion started a couple of weeks after hitting 110. That’s the point where I could start buying a lot of BoEs and still have money left over for material flipping etc. I also got access to level 110 recipes and steady sales from crafted goods, which helped finance the shenanigans.

I didn’t plot my liquid gold as it tells a much less interesting tale. I reinvested my gold as fast as I possibly could during the challenge so it was mostly kept low throughout until it spiked to 1 million. 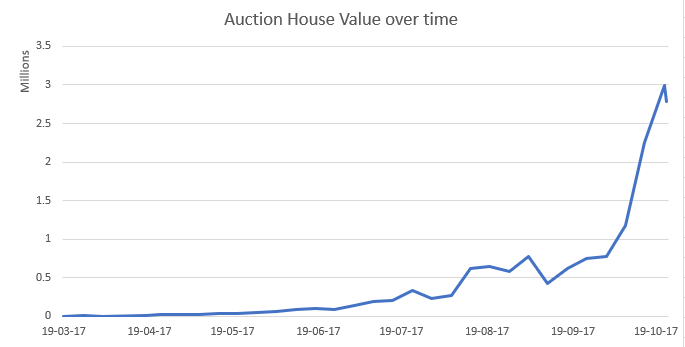 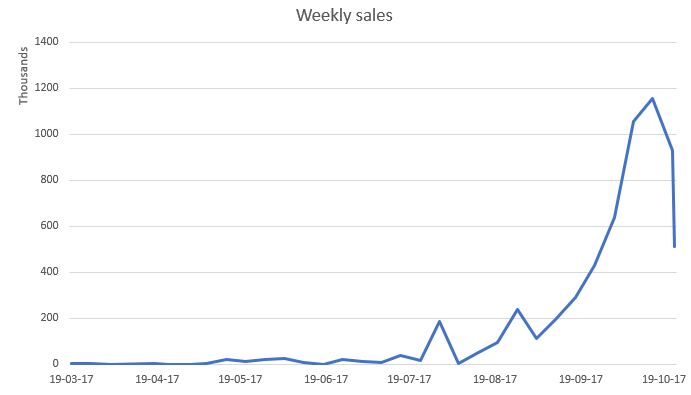 I did very little since my last update as I hit 1 million literally the day after. I just reposted all of my stock to keep it up. I got a couple of very big BoE sales on Monday including a Sameed’s vision ring for 149 000 gold that put me over 1 million. I ended up at 1,1 million so I had sales totalling 500k over two days. Pretty great! 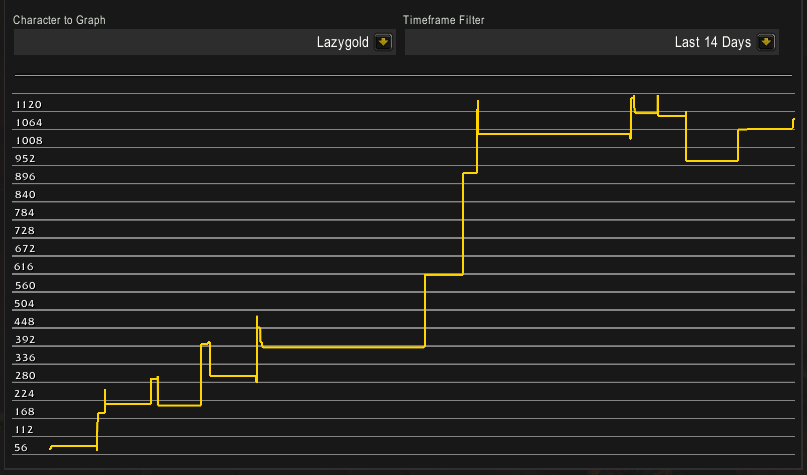 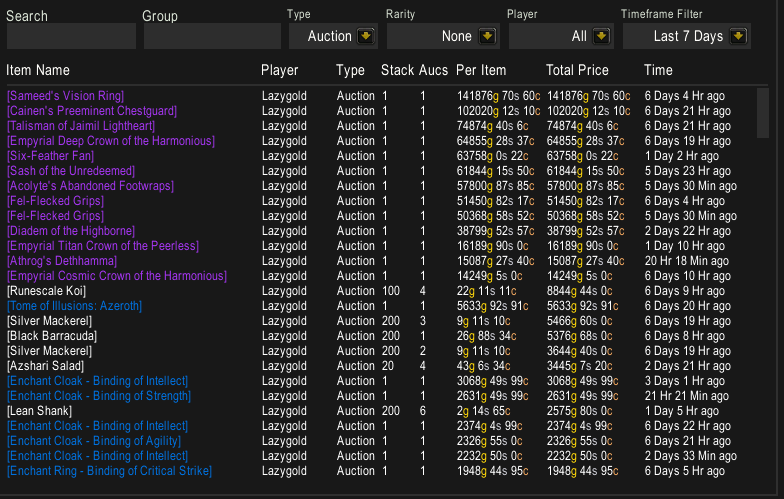 At the top of the list of valuable auctions this week we can see all of my high value BoEs that sold this week. A lot of very high value items sold on Monday as you can easily see. I resold a Six-Feater fan after the challenge ended as well.

The resale summary below shows a similar story as usual. It only shows purchases done the last week on this filter, so some flips are omitted. I’ve sold quite a few more dalaran vendor cooking mats, so look into that if you need some easy gold. 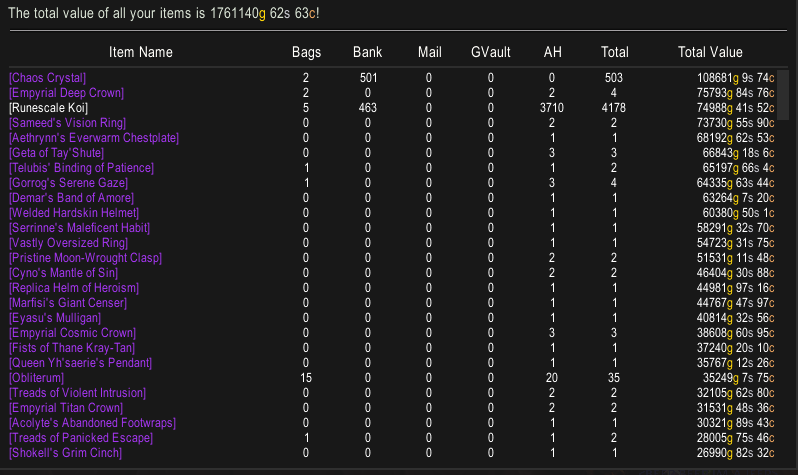 As you can see I’ve begun stocking enchanting materials. I have a ton of chaos crystals, but I’m having trouble finding enough arkhana. I’ll solve it by getting a leatherworker to shuffle leather. In addition my inventory is still dominated by the BoEs. It is still the best way to generate wealth. I have truly hit the break point where my inventory is big enough that I primarily generate liquid gold now.

9 thoughts on “Zero to One Million Gold: Challenge Complete!”