Update 25 is a day late as I have been enjoying myself on the beaches of Croatia. I am back now however and the challenge must go on.

I switched out Engineering for jewelcrafting this week to get into Argus crafting. Sadly the prices are going down fast and I think I bought my empyrium at too high a price to really be profitable. I can’t craft crowns as I do not have any ways of getting Primal Sargerite. Gem cuts sell, but the prices mean that I will likely run a loss. I did one final round of Skullblasters crafting and even though Obliterum prices are slightly down I could still craft a lot of it profitably. Hardened felglass was very cheap, which helped a lot.

I have been working on Nightfallen rep as much as I can and I am closing in on Revered. I have also done a lot of Argus content.

I have also done quite a bit of Obliterum shuffling. Cut rare gems and the new epic gems are both great potential sources of obliterum. One cut rare gem gives 16 ash and the new epic gems give about 2/3 of one obliterum (both cut and uncut). So keep an eye out for cheap Hesselian and Labradorite in particular. I’ll be writing a full post on this later this week.

You can easily see my massive shopping spree on the gold graph from 160k down to 50k. I bought a ton of empyrium and various items to turn into Obliterum. 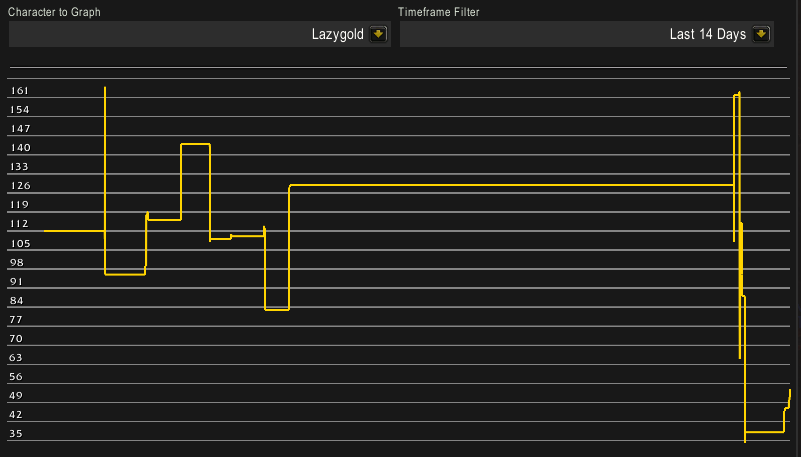 We can see I’ve sold quite a bit of Obliterum. 40 at 1900 per. The minimum buyout was at about 1600, but selling in stacks of 10 still allows you to overcut and sell at very decent speeds.

I have also sold some gems, motsly uncut, but some cut. All of these sales are since yesterday as I prospected all the gems I have yesterday. I still have almost 70 more Obliterum waiting to sell.

I’m experimenting with gem sales and I will see if I can get any other jewelcrafting profits as I get through the quest line. 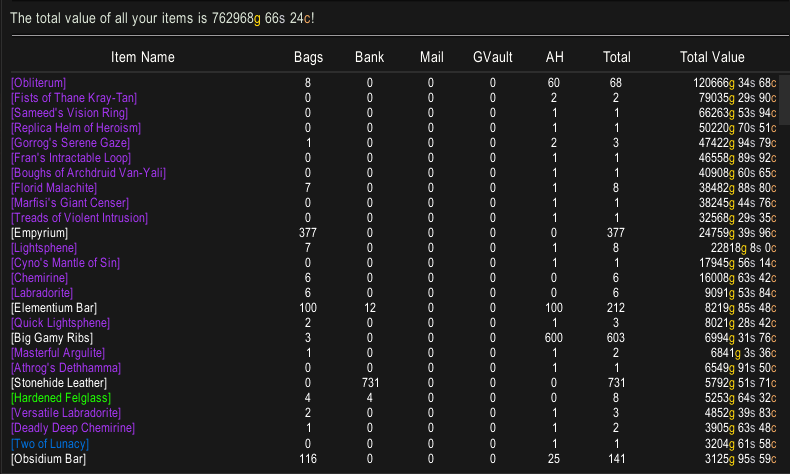 As you can see I have a lot of obliterum now. I also still have a large amount of BoEs, some Empyrium and quite a few gems. In total my inventory value is way up even after my massive spending spree. I find that the obliterum shuffle TSM group is working very well for me. Here’s hoping I can get some more liquid rolling by next week.