Another week has passed and I have attempted making more gold.

This week I have been working on my reputations and some Order hall campaign quests mostly. I am a little over halfway from Revered to Exalted with Nightfallen and the rank 3 enchant recipes are looking like a possibility. I have also been keeping on top of the Argus Primal Sargerite world quests to stay on top of crafting Empyrial Crowns.

I have done some Obliterum shuffling, mostly through cheap epic gems, but the current Obliterum market is not doing well. I have also started more actively buying 101 BoEs and materials to flip.

As you can see from my gold graph I have been spending gold hard and fast, but my income has been quite high as well. I have had about 300k in total sales this week so my operation is at least gathering speed. 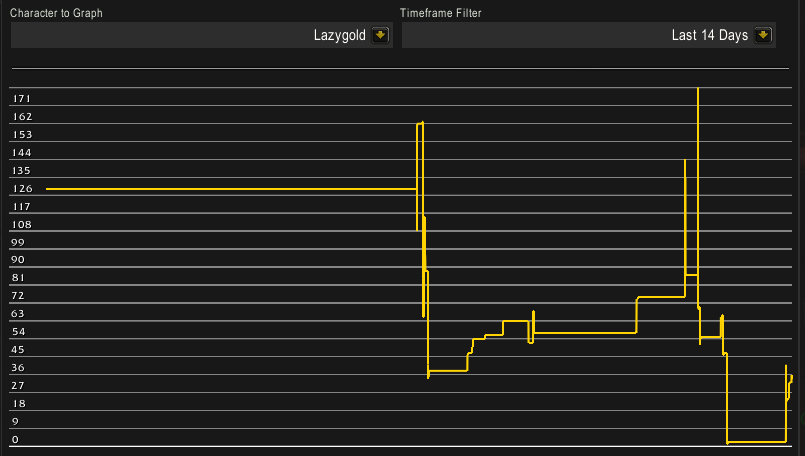 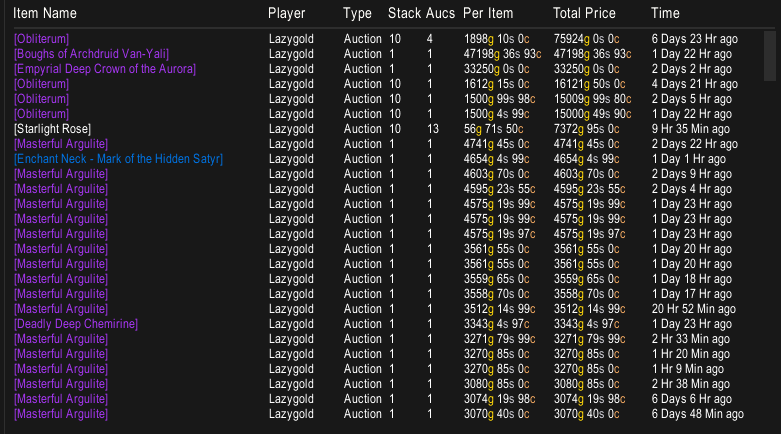 As you can see I have sold a lot of gems this week. Argulite has been the most profitable one, but I have also sold a lot of Quick Lightsphenes and Deadly Deep Chemirines. The Versatility gems are not selling to well sadly. I have also tried my hand at selling the Mark of the Hidden Satyr. I still haven’t gotten the rank 3 versions from Emerald Nightmare, but I’m hoping I’ll get it eventually.

You can also see that I’ve sold a BoE and one Empyrial Crown. I currently have two more Crowns crafted that I’m hoping to sell and a decent amount of gems.

As you can see from the resale summary below I flipped a ton of Starlight Rose this week. I have also been buying some gems to ensure that the price stays high. Flipping cooking materials continues to be a promising endeavour, the resale profit on those Wildfowl eggs is pretty incredible. 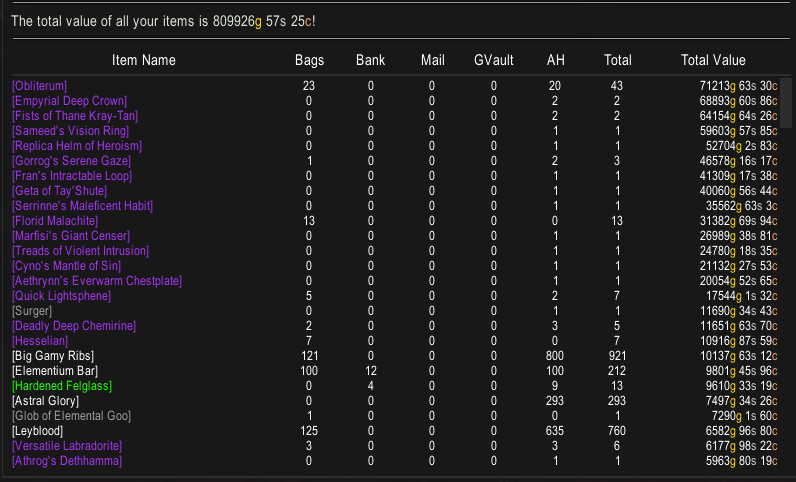 I have a lot of gold tied up in Epics now. I bought several new BoEs and I crafted two Empyrial Deep Crowns. In addition I still have a good bit of Obliterum lying around. Sadly demand seems to be really slow and it is not selling nearly fast enough. I got the pet Surger from doing Firelands Heroic on Saturday after I ran out of gold completely. Some Legion cooking materials have made a great comeback into my inventory this week which is great.

3 thoughts on “Zero to One Million Gold: Status Update #26”